A 45-year-old budding golfer from Ardboe, who took up the sport last month, was asked to leave the British Open Golf Championship in Southport, England, for shouting ‘Mullinahoe’ just as crucial putts were being made on the 18th green.

Billy Forbes, who was attending his first golf tournament this weekend, touched down in Aldergrove tonight stating a serious misunderstanding had been the cause of his eviction:

“I asked the lads in the bar at home what them people were shouting when golfers made a putt, especially in America. They said ‘Mullinahoe’ which is where I was brought up. They said it was in recognition of great Irish golfers over the years. I didn’t know they were really shouting ‘get in the hole’. I was set up.”

Things came to a head when Rory McIlroy heard the ‘Mullinahoe’ shout before he’d even made the shot and pointed him out to the stewards. Fellow spectators said he’d already shouted it over 100 times by that stage.

Meanwhile a bid by the Brackaville 9-hole golf course to hold the 2024 Irish Open met a slight hitch today during an early inspection process by Irish golfing officials, after their head inspector, Graham O’Connor (65), was butted by a buck goat up the 5th hole.

Four local politicians were said to be ‘slapping the heads off each other’ on Portstewart Strand after DUP member Myles Forsyth claimed there were more green flags than orange at the holes during the second round of the Irish Open.

Golfing officials moved quickly to deny the allegation, stating that they don’t often get the chance to use green flags as it normally blended in with the colour of the grass but, due to the high volume of yellowy sand dunes, they decided to roll with it.

“I’m not buying it. They’re trying to eat into east of the Bann with this stunt. It’s no coincidence that holes 1, 9 and 16 had green flags. 1916. The golfing fraternity appears to be riddled with republicans and, even worse, catholics.”

Officers had to be called to the Portstewart Strand beach after a scuffle between minor DUP and SF members resulted in bare knuckle boxing between four politicians over the flag colour affair. The fight reportedly began when a Sinn Fein member shouted ‘I’ll chucky this sand into yer face’.

Meanwhile, a rumour that all NI golfers who failed to make the cut did so in order to get drinks in before the 12th has been ridiculed by Rory McIlroy’s PA James Nesbitt.

A 69-year old Greencastle widow has rubbished the driving skills of recently crowned BBC Sports Personality of the Year Lewis Hamilton as well as lambasting the talents of most modern sport stars.

Mary Devlin, who had to re-sit her driving test this year after banging into half a dozen motors on her way to collect her grandson from school, maintains she noticed a few bad habits the Formula One World Champion has developed over the last few years:

“For starters, he’s always driving over the kerb. But that’s maybe a result of breaking too late before corners and stuff. Then sure he’s always taking breaks for a minute or two every half an hour or so. How this man won that trophy last night amazes me. Looksee, I can drive to Belfast without stopping at all.”

Devlin did not hold back on other sporting high achievers:

“I hear people going on about this Rory McIlroy and how he should have won it. This is a man who walks slowly around a field in a jumper and chinos hitting a ball with a stick maybe 70 times over 4 hours. And don’t get me started about people riding bikes. I’ve been riding since I was 17.”

Officials at the internationally renowned Brackaville Golf Course are awaiting a response from Darren Clarke after they wrote him a letter asking for the £50 he won in a charity tournament in 1990. Internal investigations revealed that the Dungannon man failed to sign his scorecard at the end of his round. The then 22-year old reportedly spent the money on stout in the Brackaville GFC club.

“Rules are rules,” course manager Frank Fay told us. “This might be the best thing to happen to Darren – he’ll not make that mistake again.”

Fay added that Clarke’s ‘people’ told him over the phone that Darren hasn’t got £5o on him at the minute but that the next time he wins a big tournament he’ll definitely send over a cheque.

“That’s not good enough. I understand he hasn’t won much lately and is probably living off beans but debts are debts. We need that £5o as much as he does. The lawnmower’s bucked and Patsy’s goat has been under the weather so we’re stressed out here too. If we don’t see that money by the end of the month, there will be a couple of Brackaville boys making their way to his place, wherever that is.”

Fay also announced they have renamed the controversial 4th hole ‘The Rory McIlroy’ because that hole straddles both townlands of Roughan and Brackaville and people can have one foot in one place and the other in another creating a lot of confusion about where they are. He hopes the 4-time major winner will open the new hole ‘and bring a rake of fancy wemen with him‘. 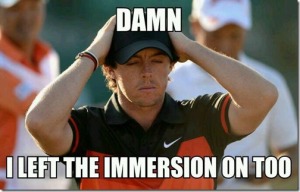 Coalisland man Jack Fitzgerald has been issued with a three-year Open Championship ban after officials got fed up of his series of rude jokes over 4 days at the Hoylake course.

Fitzpatrick, who claims he was just lightening up ‘a serious shower of people‘, was warned 14 times over the weekend before being evicted after a comment left Rory McIlroy visibly shook up on the 17th tee.

The comment which broke the patience of the Hoylake officials was when Fitzgerald innocently bellowed:

Rory had to take five minutes to chat to his psychologist before clinching his first British Open. Fitzgerald claims he was simply looking after his countryman and that he’d say the same to any Irish golfer after a wintery day on the course.

“This is another example of the PC brigade gone crazy. On Friday I was made to pay a fine of £40 after shouting ‘look at the size of his putter’ at Tiger Woods’ yoke. Then on Saturday I roared at Darren Clarke ‘that’s a quare and big hole you’re looking at’. His caddie went clean mad thinking I was slagging him. I was only trying to boost Darren’s confidence.”