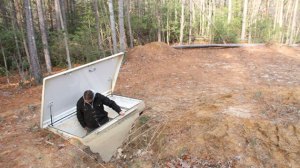 Following a spate of high-profile celebrity deaths as 2016 comes to a close, the Tyrone County Treasure Comittee have urged over 30 local personalities to take advantage of an underground bunker in Omagh for a few days, built in 1986 when they were worried about Halley’s Comet hitting the town.

Speaking on behalf of the Committee, Janet Garvey admitted it was tough leaving out some of our more well known stars:

“Owen Mulligan turned up with a six Harp tins and a 14 bag of Walkers Crisps but we thought he wasn’t sending out the vibes we want in there, especially as he was dressed up as the grim reaper. There was also no room for Sam Neill and Peter Kay as they haven’t really spent much time in the county.”

Early reports suggest things haven’t settled well with eye witnesses confirming Dooher and McElduff were engaged in a fist fight at the bunker door over allegations of snoring and snattering during the middle of the night.

The bunker will be opened again on January 1st 2017 with the majority of them expected to leave.

An indoor bowling friendly between East Tyrone and West Tyrone ended acrimoniously with threats of drive-by shootings and all-out warfare hanging over the Red Hand bowling community. The annual charity match took place last night in Brocagh with the home side hotly favoured to emerge victorious according to suspicious betting patterns in Toals Bookmakers in Dungannon and Strabane. East Tyrone, with its rich indoor-bowling pedigree, started with an average age of 72 whilst relative newcomers West Tyrone presented a more youthful 66 year old average. The referee, Malcolm Turnbull from Lisnaskea, filed his report immediately before giving the following interview to our indoor bowling reporter:

“It was clear from the start that tensions were high. The West Tyrone side emerged onto the short mats to the tune of ‘The Hills Above Drumquin’ blasting from a ghetto-blaster on the shoulder of their captain, 69 year old Paddy Graham. They seemed psyched, obviously hurting from the previous 45 defeats. Not to be outdone, Masie Davidson herself sang ‘Brocagh Brae’ as she led the East crowd out. I feared the worst and so it turned out after the first end. Henry McCann from the Moy and John ‘Kib’ Foster of Gortin seemed to have their bowls equi-distance from the jack. McCann wasn’t in the mood for calling a draw on that one so the measuring tape was produced, showing it was actually Foster who was closest. That’s when it all kicked off.”

“It was when Hugh Morgan said Adrian Logan couldn’t lick Jerome Quinn’s microphone that I heard the slap. When I looked up Morgan was laying prone on the mat. It began to cut up rough. Within seconds, all I could see were walking sticks, dentures, wigs, commodes, vests, viagra, prune juice, wind chimes, magnifying glasses, hearing aids, laxatives, slippers, nice warm sweaters, stuffed animals, cinnamon rolls, jigsaw puzzles, yarn, cotton buds, incontinence pads and currant cake flying through the Brocagh air. It was a war scene. I just left them to it.”

The East Tyrone Bowling Society released a statement this morning saying although they regretted not finishing the game, the West Tyrone squad may sleep with one collective eye open at night. Witnesses in West Tyrone have confirmed that they are stocking up on ammunition tonight for an assault on the loughshore at the weekend. 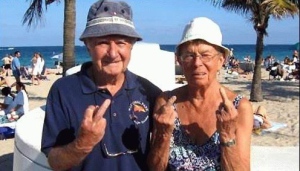