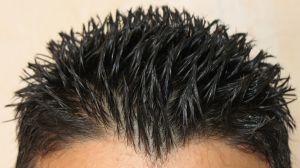 It has emerged tonight that a soaring spike in the cost of standard hair gel has forced the Tyrone County Board to ask for a few pounds a month from players to cover the backdrop in finances.

A leaked document last week indicated that, despite changing to the cheaper but less effective Boots version of men’s hair gel, over £30’000 was being spent on gel, hair dye and tanning products.

A squad member sent us an email this evening, complaining of the poor standard of gel which left players feeling vulnerable and exposed during the rain-drenched Saturday night game against Dublin a fortnight ago.

“It’s bad enough that the gel is now of a lesser standard than the stuff Mugsy and big Sean used to use in the last decade, but they’re making us pay for it. Tiernan McCann was black carded last week because he couldn’t even see the player coming towards him as the cheap stuff was tearing the eyes out of him. And why do you think McCurry’s accuracy is off?”

The email also suggests that Sean Cavanagh has been told they can’t afford the dye any more and we’re to expect a more “salt’n’pepper” look from the Moy legend in 2017.

Croke Park officials have subsequently asked Tyrone GAA to pay for the extra watering needed for their pitch after the cheaper brand of tan washed off onto their turf during the exciting NFL draw.

“Niall Sludden was completely unrecognisable at the end of the game in that we thought he was a spectator trying to break into the changing rooms at the end. He changed two shades. They County Board have ended up spending more by cutting costs. Pure shambles. “

Players are being asked to pay a direct debit of £3 a month into an Abbey National account in Clogher. 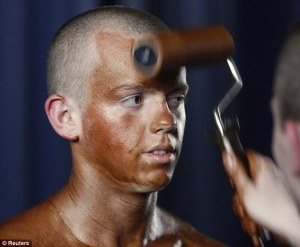 A controversial retail outlet which opened in Strabane last week was temporarily closed by health officials on Monday pending an investigation into lack of safety practices and potential impropriety.

‘The Tan in Strabane’, a tanning studio in Urney Road, owned and operated by farmer Eamon Nugent, was investigated by trading standard officials from Omagh following numerous complaints.

Nugent defended his shop putting it down to what he called ‘teething troubles’.

“I’ve been in the tanning industry a long time”, he said. “Twice to Benidorm and a week in Bundoran last July during that boiling hot spell. Mighty. There’s not much I don’t know about getting a tan”.

Customers have accused the services of falling far below their expectations, including the ‘Super Deluxe All-Over Tanning Booth’, which consisted of Toner in a pair of dungarees holding two roller brushes and a bucket of what apparently looked suspiciously like creosote.

“Creosote? How dare you. Not in my establishment”, bristled Nugent. “I use nothing but the finest products. Anyway, if it was good enough for 200 yards of timber fence, it’s good enough for some of the wemin round these parts. Thon last coat went on in 2008 and it still looks like new. What are they complaining about?”

Other complaints relate to the ‘Nail & Beauty Bar’, consisting of a pair of pliers, a wire brush, and some sandpaper. Nugent was also accused of over-charging a generously-proportioned customer for a tanning session on account of her size.

“Aye, she was a big unit all right”, admitted Nugent. “I told her that because of the extra beef on her she’d get charged more so I slapped on an extra tenner. Materials aren’t free you know. Should have charged her per square foot. I’d have made a buckin’ fortune”.

“What are people playing at anyway, trying to get tan round these parts? It’s hardly Donaghmore is it? They’re not wise in Strabane. They’re trying to compete with all these Europeans types that have moved here when everyone knows that Strabane people can do two colours – tomato or snow. Half them ones that went to that shop would get burnt looking a picture of the moon. Eejits”.

The salon is closed until further notice.