‘Darragh The Tank Engine’ Writer Accused Of Plagiarism By Publishers 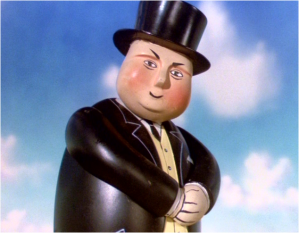 A Seskinore writer of a new children’s book has been accused of copying a long-standing children’s classic.

Last month author Marty Gallagher of Doogary Road was in discussion with several well-known Tyrone-based publishing houses about a children’s book he had written entitled ‘Darragh the Tank Engine’ about a fictional train and his little train friends, before being accused of copying a similarly named character and story-format from another popular children’s book.

“My characters are completely different from anything else that’s out there”, protested Gallagher. “See, I have this one boyo in it who’s not a train at all but a human who looks after all the railways and trains and suchlike, called the Plump Regulator. I know it’s probably a bit size-ist but it just seems like the right character. I can’t explain it. I’m copying no-one hi. It’s deadly. And if it gets made into a telly programme I don’t want some posh actor from London narrating it. I like the idea of someone with a strong regional accent, like that John Bishop fella. He’s quite good. It’s just something about the Scouse accent. Class”.

Gallagher turned to writing a few years ago after heavily investing in a typewriter manufacturing business in Belfast, which promptly went out of business two weeks later.

“Aye, who could have predicted the changes ahead, eh?” said Gallagher ruefully. “I tried to save the business by diversifying into selling filofaxes, but it was too little too late. That’s why I’ve since turned my hand to writing. I’ve some imagination, even although I don’t know where my half my ideas come from”.

One of the would-be publishers based in Trillick, the publishing heartland of Tyrone, who didn’t want to give her name, declared,

“I know where his bloody ideas come from. He needs to catch himself on. He approached us with a book last year called Barry Cotter, about a boy wizard from Cappagh who got up to all sorts of stuff with his mate, Sean Greasely. Wonder where he got that idea? And then there was his other so-called book, ‘The Lion, The Witch, and The Washingbay’. Honestly, you couldn’t make it up. And obviously neither can he”.

As of yesterday evening, Gallagher was hard at work on his typewriter expanding his range of train characters, including a “a friendly wee Welsh engine called Ivor”.