Donaghmore ‘Mortified’ That It Looks Fat On Google Earth 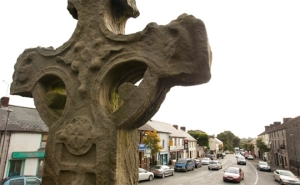 The Parish of Donaghmore today voiced concerns that it was unhappy about how it appears in the recently updated Google Maps satellite images published by the internet giant.

“Look at me!” exclaimed the parish. “I’m enormous! I didn’t even know the photograph was getting taken. I look huge compared even to Kildress. And look at Pomeroy. It’s the same size as me but it’s deliberately covered itself with trees so that you can hardly see it. And Aghaloo deliberately went and made itself smaller or something”.

Donaghmore admitted that it has grown in size over the past 3 million years as it was so unhappy with its shape, and confessed it had eaten into parts of Killeeshil and Drumglass when no-one was looking.

“It’s not the point. If I had known in advance a photo was going to get taken, I could at least have smartened the area near Galbally or given myself a tidy up round the Bush. That might have helped. To be honest it’s just a bad photo. I never look my best in the spring. And the satellite was far too close when it took the picture. Still, at least I’m not the the size of Cappagh”, snorted Donaghmore. “It’s big enough to have its own feckin’ postcode!” before realising that all parishes do.

In a controversial move, the parish has agreed to an extreme make-over in the form of extensive quarrying around Granville which is expected to remove 3 million tonnes of rock and sand from the area, as well as having 500 hectares of forestry removed. “Oooh, I can’t wait”, said Donaghmore excitedly, “It’ll be like a new me”.

Meanwhile, the parish has since stopped talking to Carnteel which it says should have warned it the photograph was getting taken.

Predicted Severe Winter in Kildress May Not Be Accurate

Despite earlier predictions of a record-breaking savagely cold winter in mid-Tyrone, locals in Kildress have received communication which casts doubt on that original analysis of a seasonal hardship. Kildress is one of the last townlands in Ireland that still maintains a clan-like system with a leader voted in every four years, one calendar month after the American president is sworn in. He or she is elected on their ability to be at one with nature and possess the talent to predict weather changes in the immediate future as well as long-term for the important farming community. Current leader, Tommy Higney, a surprise choice four years ago, was exposed last night by his secretary as a fraud:

“It was that time of the year again when Tommy was being constantly approached to give his pronouncement on the winter. I knew he wasn’t a natural at that. He told me to phone up the NI Meteorological Dept and put him through. I heard the whole thing. He asked them what they thought about the winter coming. They said it was likely to be cold enough. He said rightso and then told everyone in Kildress to stock up on wood as it’ll be a cold one.”

Higney didn’t stop there though. So that the locals thought he was a truly reliable leader, he kept in touch with the Dept for constant updates.

“Every time he phoned he’d get more accurate news. The second time they said it would be even colder than they first thought. Tommy went straight out and told the locals to cut down even more trees and store them for winter. The third time he was told it’d be a severe winter. Same story again, Tommy declares after mass that they need to prepare for the worst winter in 100 years by stockpiling wood.”

Fearing for his community’s well-being he made one more call to the Meterological crowd to ask how they arrived at their analysis for the coming season. Secretary McGurk explained:

“I heard the whole thing. They firstly told Tommy that this’ll be the worst winter on record be he asked. He flipped out and asked how they could predict this worsening scenario. Yer man said it was classified information but as Tommy was an avid weather watcher, he’d let him in on the secret. They predict the future by watching Kildress people and their tree-cutting habits. The more they cut, the worst the weather was going to be, said the official, and they’d been cutting like mad lately. Tommy nearly choked. I barely muffled my laughing.”

Mary McGurk immediately exposed Higney’s backhandedness and declared herself a runner for the forthcoming elections.