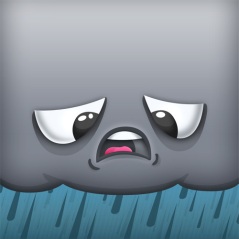 A gigantic rain cloud currently sitting over Tyrone has apologised unreservedly for dropping almost 4 million tons of rainwater on the region over the past week.

Roisin Devlin, a 3-mile long cumulonimbus cloud, who is currently moving slowly westwards over Omagh at 3,000 feet, made the apology after unexpectedly drenching thousands of unsuspecting residents on Wednesday, who appeared surprised that rain might fall in Tyrone in February.

“Ooh, I was affronted”, squeaked the enormous mass of condensed water vapour. “I thought if I could just make it over to Lough Neagh where I could do my business in comfort without bothering anyone I’d be fine, but I just couldn’t. I was bursting. I got as far as Dungannon before it all just gushed out over a six-hour period. It went all over the place. I’ve never been so embarrassed. Tara”.

The rain cloud confessed that it had not helped the situation.

“I’ve been to see a meteorologist, who was a lovely man, and he said I should cut down on the precipitation. Well, easy for him to say, but see, whenever I hover over sea water up by Donegal and all that lovely stuff starts to evaporate, I just can’t help myself stuffing myself. I’ve no willpower. And I do like coming over to Tyrone. I don’t know what it is about the county, but every time I’m there I just seem to get really full and bloated and before I know it I’ve just lost control. Maybe it’s an age thing, once you get to a certain time of life. I am two months old after all”.

The cloud went on to confide,

“I’ve also been very windy recently. I’m a slave to it. I think it might be hereditary because my grandfather used to be a grade one typhoon in the mid-west in Americay. That’s who I get it from. And I have a cousin over in the south of England at the moment, and he’s even worse. Just can’t keep it in”.  The cloud went on, “And do you know, it doesn’t help having a fear for heights. You try looking down from 3,000 feet and see what it does to your waterworks”.

The cloud is currently in a relationship with a bank of fog near Drumquin.