One of Ireland’s finest clock-menders has been stood down from fixing the troubled Big Ben clock in London after only two days on the job. The lucrative contract, thought to be around £40m, has been handed to a Swiss firm who came second in the initial contract bids.

Liam Coyle (62) admitted changing the chimes ‘for a laugh’ whilst setting to work on fixing the clock, programming the ancient tower bells to ring out ‘A Nation Once Again’ and ‘Come Out Ye Black And Tans’ during various hourly alarms.

Big Ben PR co-ordinator Harry Seals admitted the joke was a source of major embarrassment for the city:

“Coyle’s CV references were good and we had no indication he would do something like this. It wasn’t until we saw a group of Irish men jumping in and out of the river Thames shouting ‘yahoo’, ‘yeooo’ whilst drinking beer that we realised it wasn’t your routine Big Ben chimes. Coyle was replaced immediately.”

One reveller, Johnny Lavery from Belfast, revealed he couldn’t believe his ears when some of the Wolfe Tones songs were being sounded out across London on the famed bells:

“We’d been drowning our sorrows after the rugby but this cheered us right up. As soon as we heard ‘Four Green Fields’ we went clean mad and jumped into the Thames. It was a dangerous enough stunt to be at, what with pollution levels and all, but that music does stuff like that to us, so it does.”

Coyle arrived home to Gortin tonight to a hero’s welcome with over 8 people lining the hedge up to his house.

The 25-strong Ivory Coast community, who moved to Dungannon 30 years ago hoping to get work digging for lignite at Lough Neagh in a dig that never started, have admitted they are completely in the dark over a rise in goodwill gestures coupled with hate messages since last week.

Tanya Eboue, who has decked her bungalow from top to bottom in Ivorian flags for the World Cup, explained their confusion:

“It all kicked off when we put up the bunting for the World Cup. Within minutes there were a crowd of skin heads shouting ‘yiz fenian feckers’ and stuff like that. We tried to explain that we were just excited about our lads playing over in Brazil and they started laughing and said something about the ‘Mexican taigs down south’ being useless and not being in Brazil. We’re totally confused.”

Eboue, who runs a hairdressers in Killyman, added:

“Then the priest walked by us and shouted in ‘keep her lit’ and ‘chucky air la’ and was winking and pumping his fist. A Sinn Fein politican brought us cakes and mineral. We’re just a bit dazed by what’s going on. What has changed?”

Dungannon DUP politician, Ken Williams, has called for the Ivorian Prime Minister to step in and change the colours of their national flag as it was causing offence across Northern Ireland. In a heartfelt plea, he asked for common sense to prevail:

“Ivorians should know what that flag represents. It’s irresponsible for them to adopt those colours given what has happened here since 1561. There’s a rumour that the man who designed the flag, Kol Toure, married a girl from the mainly nationalist Carrickmore so there’s more to this than meets the eye.”

The Dungannon Ivorians have pledged to offer anyone offended with their national flag a gift of a copy of the Wolfe Tones’ Greatest Hits which has been No.1 in the Ivory Coast since 2001. 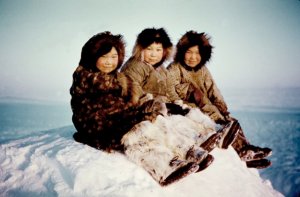 In their latest newsletter, Nasa scientists have confirmed that Kildress is the most snow-covered area on the planet, beating both polar regions, Siberia and Alaska into the bargain. In an example of its tendency to attract crystalline water-ice, a flash flood on Thursday morning saw three feet of snow fall in ten minutes in the area although it was never reported in the news due to the BBCs policy of avoiding Kildress. The 2011 census revealed that there are now 600 eskimos living in and around the Omagh Road, a statistic welcomed by local PR man Jake McClane.

“It’s a match made in heaven. These wee eskimos are bringing great trade to the local shop. They’re constantly buying chisels, fish, animal hides, kayaks and Husky dogs – things we’ve always traditionally stocked here. We get on tarra well too. The language seems to be amazingly similar. They do a lot of ‘umm’, ‘ooooh’, ‘amm’ and ‘me want ham’ and sure we’re just the same. We seem to understand each other perfectly. They also jump up and down a lot beating their chest whilst wrecking things – hey presto – so do we. It’s deadly.”

Archeologists are now looking into the theory that Kildress might have been an early Eskimo or Inuit settlement 4000 years ago, attracted by the unique micro-climate of the area. Another remarkable connection was uncovered last month when ancient Eskimo poetry was translated by Seamus Heaney which identified their word for ‘eternal happiness’ or ‘paradise’ as ‘Kildress’.

“I can’t deny there has been some protests from the Kildress Independent Front but sure those two boys are harmless enough. They’ll soften their stance when they see young Aipaloovik Alacatchi line out for the Wolfe Tones’ Under 14s this year. He’s a hardy wee footballer. Takes no crap. Great hands.”

The Kildress Inn are holding a cultural weekend of arctic festivities including sleigh-racing, snowball-rolling and the building of a five foot igloo on the pitch itself which is sure to pull in great crowds.