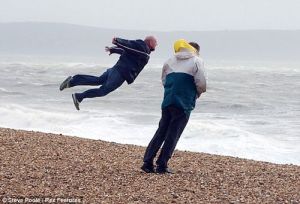 Gormley and Woods hit the beach in NY

Despite repeated warnings to evacuate the area coupled with gusts of up to 85mph, three Carrickmore tourists continued to ‘drink on’ in a beer garden in downtown New York, sparking public statements of disbelief and awe from the highest authorities.

Barney Shields, Tommy Gormley and Kyron Woods had flown out to New York for three days on Sunday on a post-season blow-out which they had planned for ages. Despite warnings of treacherous conditions and the unmissable wailing sirens, the three Carmen men headed on down to O’Neill’s Pub anyway on 37th Street for a ‘lock a pints‘ as the storm hit the city, maintaining that they were always going to get the most out of the much-anticipated trip.

Woods, 36, who’d never set foot outside of Carrickmore before, explained their stance:

“We’d been looking forward til this for ages, boys. There’s no way a drop of water was going to spoil my three days in Amerikay. The Yankee barman wasn’t prepared to stay on after our 5th pint with the wind gathering an all but we toul him to leave us the keys. A nice man, he agreed and ran off. The beer garden was a bit ropey what with the umbrellas flying about, falling bricks and the sheets of hard rain but sure it was no worse than playing Derrylaughan down by the shore on a similar day in March.”

An impressed President Obama mentioned the threesome’s actions during his national address this morning:

“….and some say we are a weak nation. If that’s how the world sees us, well then it’s time we borrowed the willingness to stand firm in the face of adversity from those three Carrickmore heroes in 37th Street. The world watched as they faced up to Hurricane Sandy and said, ‘we ain’t going nowhere’. Up the Carmen I say. Up the Carmen.” (great applause and chants of ‘Carmen’ from Congressmen and women)

Woods, a little perplexed by Obama’s comments, told us:

“I don’t know what he’s waffling on about. I’d already bought six rounds. Them there hoors had only bought four rounds each. I wasn’t leaving til it was all evens. There’s nothing worse than being stung when doing rounds.”

Shields and Gormley were too delicate this morning to comment.