Next Series Of Downton Abbey To Be Based In Killeeshil 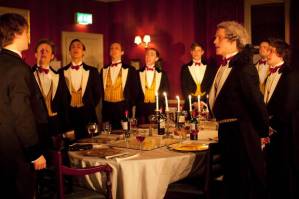 The BBC have refused to confirm or deny an increasing number of rumours that the next series of Downton Abbey will be filmed in Killeeshil.

The British period drama, set in the fictional Yorkshire country estate of Downton Abbey, depicts the lives of the aristocratic Crawley family and their servants in the post-Edwardian era. However, recent cuts at the BBC mean they can no longer afford the cost of filming at Highclere Castle in Hampshire, the location used for the first three series of the programme.

An unconfirmed and exceptionally unreliable source said that Julian Fellowes, the writer of the series, had privately admitted that the series was inspired from driving through the townland of Killeeshil whilst looking for Quinn’s Corner when he was holidaying in the county in 2002.

Allegedly, the original description by Fellowes was that Downton Abbey would be based on somewhere that was “nearly as posh as some of them upper-class Killeeshil hoors but not as ruthless”, and that the description of Lord Grantham, the central character, was of ‘a big tall eejit, probably from Killeeshil, but definitely somewhere around there’.

Killeeshil residents however dismissed the descriptions of them as being ‘heartless and discriminatory’. A local landowner, who asked not to be named, stopped hunting swans on his property for a short while to respond to the rumours.

“To make us out to be all posh and out of touch is ridiculous. Killeeshil has come a long way over the years. Yes, we have servants like in the programme and whilst we do still very occasionally hit them obviously it’s only with an open palm. We’re not barbarians you know”.

Asked if he had ever watched actually the drama, the man said,

“Nearly. I was watching the news at Christmas and my wife said that Downton Abbey was on. I didn’t know where the thing was for changing the TV channel and then I remembered it was his day off, so we never got round to watching it. Listen, anyone is welcome to come and see how we live. We’re just like the ordinary folks down in the villages eating their chips and fish and champs and whatnot. Come and visit us anytime. As long as it’s before 8 o’clock. That’s when the drawbridge goes up”