Tensions were said to be at breaking point in the Annaghshee housing estate in Dungannon, following a near-fatal error by a parent who incorrectly cut up jammy toast for her 4-year old daughter Caitlin.

“I don’t know what I was thinking”, said distraught mother Susan McGoldrick.

“I was so busy making sure I used the jam that’s got no bits in it, that I cut it into triangles and not squares. I forgot that she doesn’t like triangles anymore since she saw her big cousin, who’s 6, eat sandwiches that were cut into squares. I tried to backtrack saying that it was actually her da’s toast and not hers, but it was too late. The damage was done. She went absolutely ape shit. How will I live with myself?”

The episode prompted the 4-year old Caitlin to go into a near-apoplectic fit, which included screaming, stamping of feet, tears streaming down the face and, at one heart-stopping point, flailing of arms. 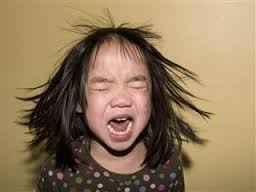 Tara melt down in Annaghshee

The stand-off, which local press have already nicknamed ‘Toastgate’, continued late into mid-morning, with local neighbour and Councillor Sean McGill being quickly summoned to the scene. McGill was able to talk to reporters during short breaks in negotiations.

“It’s tara boys, I have to tell ye”, as he mopped sweat from his brow with a Thomas the Tank Engine serviette. “It’s a knife edge in there. To make matters worse, wee Caitlin’s got hold of the remote control and she’s started waving it about. If she accidentally deletes all of the Game of Thrones that her big sister’s taped, then Caitlin’ll be the least of our worries.  Jays, I’ve never encountered anything as hard as this. And I used to sit on the Parades Commission”.

The delicate negotiations began shortly after 10am, with Caitlin’s father Peter trying to diffuse the situation by offering unlimited Cheerios and two Jammy Dodgers, to no avail. They later made some headway with a further concession of three back-to-back episodes of Strawberry Shortcake and a stay-over at Granny McGee’s next weekend, which was met with sniffles and folded arms, but fewer tears.

However, latest reports indicate matters taking a turn for the worse from an unexpected source, when father Peter foolishly advised Caitlin that ‘Mummy was a stupid bat for making her feckin’ toast all wrong”.