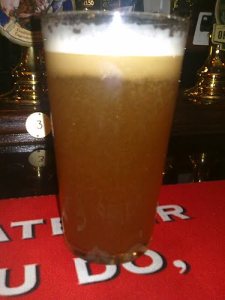 A Coalisland plumber, who has been reported for spontaneous flashing in the town over a dozen times since January 2014, has told Omagh Courthouse that a ‘bad pint’ in his local pub usually coincides with his lewd and illegal activities.

Hughie Corr (49), who hasn’t had a drink since his most recent flashing episode on the Main Street last Saturday, has vowed to change his drinking establishment in an attempt to address the recurrent problem. Corr told Judge McCabe

“I can usually tell after three or four sips that it’s a bad pint I’m drinking and that there’s a strong likelihood I’ll be at the flashing later on when I leave the place. I’ve told the bar man a few times now that he needs his pipes cleaned but I’d never want to push it as I’ve a sizeable tab running.”

Judge McCabe has ordered all 12 in the jury, as well as himself, to spend a day drinking in the problem pub to see if there are any legs in Corr’s story:

“I’m well aware that a bad pint can play havoc with a man’s emotions but flashing is on the verge of an unacceptable response to it. We’ll spend the day in the pub and hopefully this social experiment will find this man either guilty or innocent.”

Corr has a previously conviction for damage to a neighbour’s car after blaming a ‘bad steak’ he consumed earlier that day.