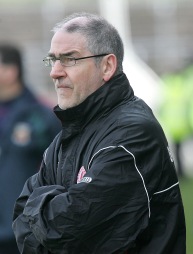 Local spy Sean McGrinny suspects that Mickey Harte is adopting a new tactic to frighten ‘southern teams’. The cunning plan dawned on him after reading the names of the Tyrone team that beat Derry in the final of the McKenna Cup.

“Usually,” explained McGrinny, “since I am a freelance spy and don’t get paid very much I can’t afford to buy a program going into the matches.

On Saturday evening I dressed up as a Senior Citizen in order to get into the match in Armagh at a reduced rate. My disguise worked well and the young man beside me seemed to take pity on my age for at half time he bought me a cup of tea and let me borrow his program. I nearly killed myself laughing when I saw the name sheet that Mickey Harte had handed in.

He called one of the Tyrone players Hugh Pat! Whilst those kind of double barrelled Christian names might be common down south they just don’t happen here.

Then I spotted the name Henry Og and I nearly wet myself. We all know in Tyrone that a child with the same name as the father would just be called “Wee” Henry or whatever.

I asked about 5 or 6 people coming out of the match if they agreed with me that Mickey was trying a new tactic and they nearly all did except for a few who were just trying to be awkward.

In order to prove to myself that I was correct I went home and fired off an email to the Queen’s Bench at the Royal Courts of Justice asking if anyone from the 6 counties had recently changed their name to Hugh Pat by deed poll. Needless to say I have had no response which more or less confirms my suspicions. I think this name changing tactic is a clever one coz the southerners will start to think we’re just as Irish up here as they are down there and then they’ll start to think we’re the match for them in all things Irish including football.”

There is a rumour that Kyle Coney has been told that he’s guaranteed a place on the team  if he agrees to change his name to Cu Chulainn.

Original Theme Music - Philosophy On Life, The Universe And Everything...