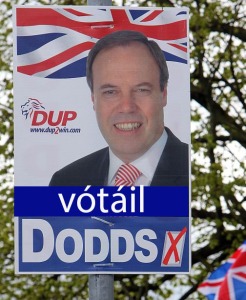 Many new wood pellet boiler owners have complained that installation of home-boilers has become almost impossible due to a clerical error which saw all instructions printed in Irish and Polish since September 2016.

Over 2500 boilers remain uninstalled in areas such as Fermanagh, Dungannon, Ballymena, Bangor and Holywood. As a result, political commentators are predicting a shocking u-turn regarding the DUP’s stance towards the Irish Language Act.

Willie Harper (57) from Caledon in the Clogher Valley, a third cousin of a prominent DUP politician, maintains it’s a stitch up by Sinn Fein or someone ‘fenian with an agenda’.

“How the hell can I install my boiler when the first words are ‘dia duit’? My neighbour says it’s pronounced ditch. Well that’s where the fcukin thing will end up. I looked at the last page and it says ‘oscail an doras’. Who’s Doris? There’s a pile of farmers going to  Irish night classes in order to get the boilers up and running. It’s a scam.”

Insiders claim that senior DUP figures have softened their attitude on the idea of an Irish Language act since this news broke. An annonymous backbencher told us:

“I’m nearly sure I heard Nigel Dodds greet Foster with ‘A h’Arlene, cad é mar atá tú?’ They’ve started on it already it appears. Sure even the chickens in Moy Park cluck in Irish as they had to get Irish-speaking boiler men to install the RHI boyos and the chickens picked it up.”