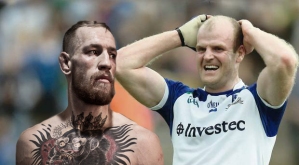 Monaghan officials have described as ‘cynical’ the move by Tyrone to hire Conor McGregor as the car park attendant for their championship class in May in Omagh, with special responsibility for buses.

McGregor, who recently found himself in a spot of bother after an altercation with a bus in America, will reportedly be paid £10 an hour for the day, funded by a special collection made at a Club Tyrone meeting in Garvaghey last week which raised £2m in 10 minutes.

Monaghan GAA vice chairman Pat Shovelin maintains it’s a sign that Tyrone and Harte are feeling the pressure before the big occasion:

“It’s a form of dirty tricks. But we’ll be prepared. We have already attached cages to all the windows on our bus and Dick Clerkin has promised to arrive early and stand beside McGregor in case he tries something like he did in the States. Our Dick isn’t afraid of anyone.”

Additionally, over 4000 Ricey McMenamin masks will be handed out to the crowd on the day which has been renamed ‘Ryan McMenamin Appreciation Day’, in another move which has been described as ‘intentionally intimidatory’ by Monaghan officials.

Meanwhile, Kevin ‘Hub’ Hughes has been drafted in by Harte to help out Stephen O’Neill in coaching forwards how to become more accurate in front of goals.