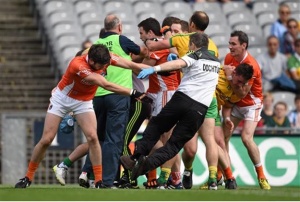 In addition to a series of new easy-to-understand rules already being implemented for the start of the league, the GAA authorities have managed to slip in a plethora of surprise changes which should ‘spice up the game’, according to Playing Rules Committee PR Tam O’Rourke.

One of the most controversial changes is the rule that “if you catch the ball left-handed between the midfield and the 45m of the opposition’s half, and land on both feet simultaneously or within 0.05 seconds of each other, facing away from your own goals, whilst raising three fingers on your right hand, you will be awarded a free kick from a 45 degree angle to your nearest opponent as long as that opponent is also either airborne or looking towards the sky with both eyes, and that the ball was kicked towards the recipient with conviction”.

“This should re-ignite out love for the the lost art of one-handed catches and stop Ulster players passing the ball around and keeping it and all. In terms of kicking the ball with conviction, a look into the eyes of the kicker of the ball, as he kicks it, should be enough to ascertain his intentions. It’s spicy. It’ll spice it up.”

Additionally, anyone sin-binned can only speak in Irish to team mates whilst in the bin. For the first time in high level sports, a bin will actually be used for black card recipients with rumours that it’ll be a green recycling one to help the environment.

Another rule which should be easily implemented is that only players under 15 stone are allowed to take sideline kicks.

Already, seven inter-county referees have begun seeking counselling even before a ball has been kicked.

Posted on January 24, 2020, in GAA and tagged GAA, rules. Bookmark the permalink. Leave a comment.