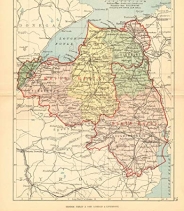 As hundreds of Derrylaughan residents woke to the fact that they’re now Derry people, Irish News readers have contacted authorities in their droves to provide evidence that the media are in cohoots with Derry.

A blueprint for the Derry invasion of Tyrone was uncovered in a graveyard in Lissan, with Cookstown next to be annexed before Easter. However, The Irish News have been accused of simply relocating Tyrone townlands into Derry through their articles, unashamedly.

Derrylaughan stalwart Packie Kennedy admitted it was hard waking up a Derry man this morning:

“It was a bit of a shock to read in the paper yesterday that we are now in Derry. Though, to be honest, I found myself half fancying my cousins at Mass this morning so it must be true. Up the Oak Leaf.”

Cookstown have already brought in reinforcements with several Kildress and Greencastle men manning the main road up to Magherafelt. Rumours tonight suggest that Ardboe and Moortown have already fallen and it’s only a matter of time until Coalisland is under attack. Coalisland officials have postponed the rolling out of their one-way system until this is sorted.

Meanwhile, a Aghyaran woman walked three miles yesterday to the shops and her plastic bag split coming home, losing a pint of milk and three Freddos.