Derrylaughan Man Seen Rubbing His Hands At Price Of Donkeys 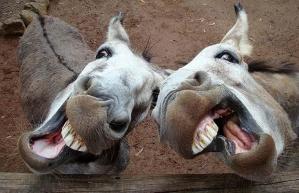 Fears that a new meat-industry scandal may emerge before the end of the year have been played down by the family of local farmer, Gerty Cushnahan, after they claimed he rubs his hands a lot of the time, even in the Summer. Rumours of impending burger skulduggery began to circulate after a group of men standing outside Falls’ Bar discussed the rising prices of donkeys with Gerty who owns about six or seven donkey for general choirs around the yard. JohnJoe McAliskey was sure he could read what Cushnahan was thinking by analysing his body language:

“I watched a programme on Loose Women a lock of weeks ago and they were discussing the reading of gestures and body language. I can tell you 100%, when Pat Hughes said the southerners were offering big bucks for donkeys for some reason, I saw Gerty licking his lips and rubbing his hands like mad without saying anything. I knew at that point what he was thinking. He’s going to sell off the donkeys to them boys in Navan who’ll pass them on to the meat factories and before you know it, you’ll be eating Cushnahan’s asses for your dinner before long. I’ve seen how Cushnahan treats his donkeys. You’re best not knowing.”

Cushnahan’s family have moved quickly to defend Gerty and at the same time sent a warning shot to the lads standing outside Falls’ Bar.

“Listen, the oul boy is always rubbing his hands. When he’s even lining up for communion, he’d be rubbing away at his hands subconsciously even though it unnerves the women in front for him and the licking of the lips makes it worse. That’s just the way he is. He’ll never sell those donkeys. Them lads outside the bar would need to quit the gossiping and scaremongering. Our Henry is now working for the bru people and if they’re not careful there’ll be a JobSeeker’s van pulling up on the Reenaderry Road.”

Donkey meat is seen as a delicacy in Iran, Cuba and Gweedore.