Tyrone Flags To Be Banned At Tyrone Matches 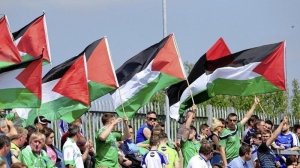 The GAA have decided to go on the front foot following the backlash to the arrest of a Tyrone supporter for flying a Palestinian flag in Navan at the weekend by banning the flying of Tyrone flags for their upcoming game against Carlow.

When pushed on the reasons for the new sanction, Croke Park officials cited two new rulings they thought up overnight in an underground bunker in Dublin:

Firstly, too many of the Tyrone flags have the Irish language on them. How are we going to get Arlene Foster to attend the Ulster Final when she has to look at Tyrone flags on the TV spelt out in their mother tongue? Secondly, we find the red hand offensive.

Guards in Carlow have been instructed to deploy water cannons and plastic bullets if necessary on anyone seen flying a Tyrone flag and to arrest anyone displaying the Tyrone hat, scarf or headband. They have also sounded a warning to Tyrone players not to be getting too excited when scoring and kissing the badge or something.

Meanwhile, Gardai have admitted they didn’t arrest other Palestine flag holders in Navan because they initially believed they were actually Carlow flags, and not because they eventually caught themselves on.

Insiders at St Patrick’s in Navan confirmed this afternoon that Colm O’Rourke had to be warned three times by the Board of Governors for ‘giggling away to himself’ at a first staff meeting for the 2015/6 academic year. Mr O’Rourke, Principal of the school, was finally asked to stand in the corner after smirking and rubbing his hands during a conversation on discipline procedures for the coming year.

Cleaner Mary Dowds, who has worked in the school since 1933, explained how O’Rourke was in unusually pleasant form for the first day back:

“The master would be a grumpy sort of man but this morning he was grinning from ear to ear and saying things like ‘I’ve got them now‘ and ‘Pat and Joe will be so pleased with me‘, and pointing at his nose and winking. We hadn’t a clue what he was on about.”

O’Rourke’s mobile phone was also confiscated by the Chair of the Board after he was caught texting several times during the meeting. Dowds added:

“He was infuriating everyone. The chairperson took the phone off him and read out one of his texts. It was addressed to a ‘Ciaran’ and it said ‘LOL, can’t believe RTE fell for it.’ It didn’t seem to faze him though and he just kept on smirking.”

Meanwhile, The Ulster Samaritans revealed they’re still perplexed at the astronomical rise in calls to their centres over the weekend, mostly from Derry and Armagh callers. Samaritans spokesperson Mary Applebum explained:

“From 6pm on Saturday evening til last night our phones were red hot with people from Ballinderry and Maghery wailing and sobbing. We couldn’t really work out what was wrong but they seemed to be worried about their heart or something like that.”

Derrylaughan Man Seen Rubbing His Hands At Price Of Donkeys

Fears that a new meat-industry scandal may emerge before the end of the year have been played down by the family of local farmer, Gerty Cushnahan, after they claimed he rubs his hands a lot of the time, even in the Summer. Rumours of impending burger skulduggery began to circulate after a group of men standing outside Falls’ Bar discussed the rising prices of donkeys with Gerty who owns about six or seven donkey for general choirs around the yard. JohnJoe McAliskey was sure he could read what Cushnahan was thinking by analysing his body language:

“I watched a programme on Loose Women a lock of weeks ago and they were discussing the reading of gestures and body language. I can tell you 100%, when Pat Hughes said the southerners were offering big bucks for donkeys for some reason, I saw Gerty licking his lips and rubbing his hands like mad without saying anything. I knew at that point what he was thinking. He’s going to sell off the donkeys to them boys in Navan who’ll pass them on to the meat factories and before you know it, you’ll be eating Cushnahan’s asses for your dinner before long. I’ve seen how Cushnahan treats his donkeys. You’re best not knowing.”

Cushnahan’s family have moved quickly to defend Gerty and at the same time sent a warning shot to the lads standing outside Falls’ Bar.

“Listen, the oul boy is always rubbing his hands. When he’s even lining up for communion, he’d be rubbing away at his hands subconsciously even though it unnerves the women in front for him and the licking of the lips makes it worse. That’s just the way he is. He’ll never sell those donkeys. Them lads outside the bar would need to quit the gossiping and scaremongering. Our Henry is now working for the bru people and if they’re not careful there’ll be a JobSeeker’s van pulling up on the Reenaderry Road.”

Donkey meat is seen as a delicacy in Iran, Cuba and Gweedore.