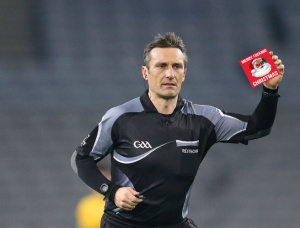 Not to be seen this winter

After a series of baffling decisions in the All-Ireland Semi Final yesterday, Maurice Deegan was added to the list of public figures that Tyrone people are not to send Christmas Cards to whether they know them or not.

Deegan, who has reportedly been given the freedom of Kerry to herd goats down any town’s Main Street, becomes the 10th GAA figure on the list joining luminaries such as Paddy Heaney, Ciaran Whelan, Colm O’Rourke, Pat Spillane, Paddy Russell, Charlie Redmond, Declan O’Sullivan, Joe Brolly and Kevin McStay.

Tyrone Post Office PR Sammy Hurson reminded the public that there’ll be regular checks at their depots throughout December:

“We can confirm that Deegan has been added to the list so we’ve hired a few extra workers to make sure no Christmas Cards slip through and make their ways to these dastardly men. Any cards addressed to the ten men will be burned on the spot and filmed on YouTube.”

With Brolly and Heaney having a rash of Tyrone relations, the PO have suggested donating the price of a card and stamp to the Strabane Donkey Sanctuary or to sponsor a an eel up at the fishery in Toome.

Meanwhile, Deegan has been given the freedom of Kerry ‘For Services To The Kingdom’ according to a Kerry newspaper. The ‘Kerry Kop’ states that Deegan will be free to herd goats anywhere he wants as long as he uses a bit of blue pipe to shepherd the goats and not a stick or a quad bike.

Sources confirmed that Deegan is unaware of the offer but is unlikely to accept the offer after turning down a lifetime membership of the Mayo Supporters’ Society in 2013. 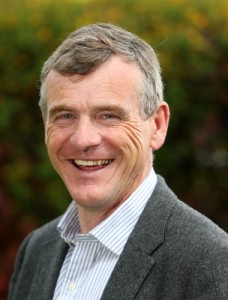 Insiders at St Patrick’s in Navan confirmed this afternoon that Colm O’Rourke had to be warned three times by the Board of Governors for ‘giggling away to himself’ at a first staff meeting for the 2015/6 academic year. Mr O’Rourke, Principal of the school, was finally asked to stand in the corner after smirking and rubbing his hands during a conversation on discipline procedures for the coming year.

Cleaner Mary Dowds, who has worked in the school since 1933, explained how O’Rourke was in unusually pleasant form for the first day back:

“The master would be a grumpy sort of man but this morning he was grinning from ear to ear and saying things like ‘I’ve got them now‘ and ‘Pat and Joe will be so pleased with me‘, and pointing at his nose and winking. We hadn’t a clue what he was on about.”

O’Rourke’s mobile phone was also confiscated by the Chair of the Board after he was caught texting several times during the meeting. Dowds added:

“He was infuriating everyone. The chairperson took the phone off him and read out one of his texts. It was addressed to a ‘Ciaran’ and it said ‘LOL, can’t believe RTE fell for it.’ It didn’t seem to faze him though and he just kept on smirking.”

Meanwhile, The Ulster Samaritans revealed they’re still perplexed at the astronomical rise in calls to their centres over the weekend, mostly from Derry and Armagh callers. Samaritans spokesperson Mary Applebum explained:

“From 6pm on Saturday evening til last night our phones were red hot with people from Ballinderry and Maghery wailing and sobbing. We couldn’t really work out what was wrong but they seemed to be worried about their heart or something like that.” 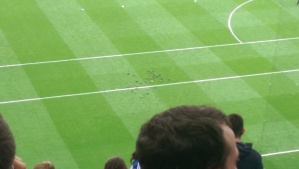 An RTE insider confirmed to us this morning that Des Cahill, Ciaran Whelan and Kevin McStay have put together a video sequence which they say shows Tyrone’s assistant manager Gavin Devlin cynically using a remote control in his ear to operate a flock of birds throughout the entire game yesterday. Shane ‘Cake’ Curran, however, has refused to buy into the idea and blames the Catholic Church and Fianna Fail for Tyrone’s surprise progression to the semi final.

The birds, numbering 20, remained on the field until mysteriously flying off over Hill 16 in the direction of Ardboe as soon as the referee blew the full time whistle. Our informer added:

“Yes, they’ve a pile of footage which shows Devlin talking into his ear piece and then you see the birds patrolling the Tyrone goalmouth, making it seem more congested than it really was. Very cynical by Tyrone when you see it. McStay has a big electronic screen with triangles and all drawn on it to show the Devlin system. It really is very professional.”

Our source revealed that Ciaran Whelan ‘went clean mad’ when McStay showed him his theory and smashed a monitor he was using to show how Tyrone cynically wore a red strip to make Monaghan think they were playing Louth.

“Whelan went berserk. His nostrils were the size of apples. Even Des Cahill was tutting and saying ‘them poor birds’ and stuff like that.”

Sources in Ardboe confirmed that Devlin was a deadly man for the birds in his teens.

The RSPCA are also looking at footage.