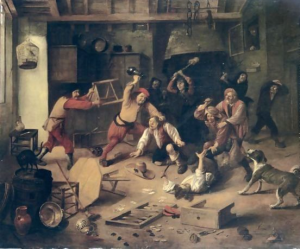 There has been mixed reaction to the news that a new Boxing Club in Galbally is to open its fine facilities very shortly in a state of the art gym built by local volunteers.

Many “auld hands” in the area had expressed their opinion that the younger generation were “goin saft” before recalling with pride the many times they had engaged in the noble pugilist art bare-chested in the snow and the rain in the car parks of The Gap, Knocknamoe Hotel, along with the neighbouring Cookstown venues of the Glenavon and the Greenvale not to mention the bouts in the middle of the busy A5 at Garvaghey or the on the main Dublin Derry road at Main Street Emyvale.

Now after a number of very successful boxing nights in the local Community Centre, locals appear to have developed a “Grá” for the better conditions boxing under a roof and a surprising new attachment to rules and regulations.

One lady, who recently moved to Galbally under the impression it was a modern settlement full of metrosexual New Men, expressed surprise to learn that a Boxing Club was opening shortly, commenting:

“I thought the local lads were more into synchronised swimming and singing along to girly videos, going on what I’d been told.”

She later required medical intervention when it was explained to her that a few local lassies are also up for the fight.

Some Galbally men are not impressed that the local lads are to fight under the Queensbury rules, believing Stormont’s fingerprints are all over this. Founder Arthur Nugent confirmed that this was not the case.

Management at Dungannon & South Tyrone Borough Council fear an epidemic of sick workers following news last week that the council staff have an absenteeism rate amongst the highest in the 26 Councils in the North.

“This has to stop. We’re far too lenient with staff with some of the daft excuses they’re coming up with. I fully intend to deal with the situation, firmly and decisively, just as soon as I get back to work after I bit my tongue last week. It’s really sore you know. I was off on Friday and I could scarcely concentrate on watching the entire Godfather trilogy. It was that bad. Ouch”.

Staff however have protested that the absences are legitimate, and that the Council should be more supportive.

“I know I was off all day yesterday, but I tried to get out of bed and my duvet wouldn’t let me. It’s the truth. People think that they climb into bed and the duvet warms them up. Mine doesn’t. It’s the other buckin way around. It’s me that heats the duvet up, and the damn thing knows it full well. It would only let me go once the central heating came on. Narra escape boys, narra escape”.

Marty Murdock, from Galbally, was also off sick at the beginning of this week.

“I couldn’t face going to work on Monday. Jaysus, I had the tara sweats and my head was pounding. I won’t go into the detail but I was in trouble at both ends. I was in Tally’s for a few hours the night before and I think it might have been a bad salted peanut or something. That must have been it, because I didn’t eat anything else. Or I don’t think I did. To be honest I can’t remember a thing”.

Joe McSorley, a scribe from Edendork also had a sorry tale of woe.

“Killeeshil lost to Emyvale on Saturday night at the Junior Championship Final. Do you know how hard that can be to recover from? I couldn’t face it. No wonder I was off on Monday and Tuesday. It would be even worse if I was a fan or I actually liked football”.

Other reasons for staff not turning up at work include life-threatening paper cuts, sore hair, getting lost on the way to work, not being able to decide what to wear, and being kept captive inside their house by a swarm of midges.