Two Finger Insult Back In Style As One Finger Phased Out 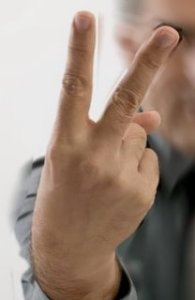 After a 2-year campaign to phase out the one-fingered gesture of displeasure, a Tyrone Tourism Board report has confirmed that the 2-fingered salute is now almost exclusively used in the county, especially by motorists or children in school buses.

The one finger, which wikipedia claims is “roughly equivalent in meaning to “fuck off,” “fuck you,” “shove it up your ass,” “up yours,” or “go fuck yourself…”, apparently dates back to Ancient Greece but was first used in Tyrone in 1986 when they defeated Derry and a supporter offered the sign to a Derry corner back at full time.

By the mid-90s, the two-fingered insult was almost completely extinct in the county and the ‘flipping the bird’ was commonly used in all aspects of daily life from farming to the court rooms.

“I’ve a tear in my eye reading this report. I can remember a pile of us from Omagh giving Ronald Reagan the fingers in 1984 in a pub in Tipperary. Never did we think that within 10 years it would be completely phased out for the more American middle finger. I never accepted it but can confirm I’ll be giving everyone I don’t like the fingers tomorrow, starting at Mass.”

PSNI officials have warned drivers that people giving other motorists the fingers will be fined as it suggests you’ve only one hand on the wheel. The middle finger can still be used if the hand still is still touching the steering wheel.

Meanwhile, a campaign to bring back the subtle lifting of one finger off the steering wheel in a friendly acknowledgement of oncoming motorists has stalled due to a lack of funding,