An Eskra entrepreneur has told friends that he’ll probably be the richest man in Ireland this time next year after revealing plans to launch his new business venture called ‘BagFace’. Tommy McNabb (56) will open the doors of his showroom to the public on Monday morning in the village and has told customers to expect long queues:

“I got the idea from watching my wife play Scrabble on the computer. She got a good word, ‘trunks’ I think, and someone sent her a smiley face back. Emoticons you call them. Instead of writing well done, you expressed yourself through this face thing. I thought, Jaysus sure that could work in the real world. So I made 5000 different faces on brown paper bags with every emotion possible from ‘happy’ to ‘slightly nervous’. BagFace is the future, boys.”

McNabb went on to explain when you could use these paper bags:

“Anywhere! I wouldn’t be a deadly boy for smiling at all and at weddings I get told off by the wife and photographers. Now I can whip out a happy BagFace, stick it on, and everyone’s a winner. Funerals – maybe you feel alright but now you can stick on a weepy face. During boring speeches – stick on an ‘interested’ BagFace or ‘intellectual’ BagFace and all the while you’re sleeping your head off underneath.”

Rather than rest on his laurels, McNabb has plans to expand his empire:

“If BagFace makes millions early on, I’ll move into the dating scene. Say, for example, a woman is a bit bored with her husband. Maybe he’s not shaving and developing wrinkles and a belly. Now, she can stick a celebrity BagFace onto him so that when they’re kissing or other stuff, she can pretend it’s George Clooney or Brad Pitt. Or whatever takes your fancy, even Stephen Nolan. This could save marriages. I can make these on demand. I am also thinking of regional BagFaces, so maybe you want your partner to look like someone from Ardboe…hey presto.” 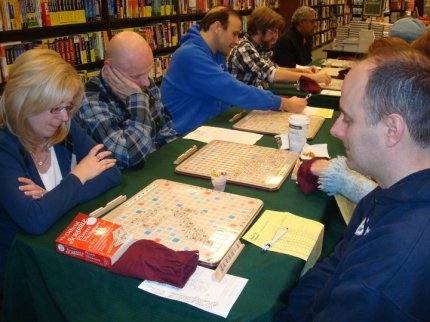 There was a sense of unease in Dungannon today after last night’s annual Scrabble tournament saw a foreign victor for the first time since its inception in 1984. With Matel announcing that they were allowing proper nouns, Polish native Wojech Wasnickski (19) romped to the title, beating 10-time champion and ex-schoolteacher Colm Doris (55)  by over 100 points in the final. Wasnickski admitted afterwards that he simply spelt out the names of places from home as well as a few cousins’ first names. Doris said he was finding the whole thing a bit shambolic.

“Listen, everyone knows I’m the smartest in Dungannon. I’ve won this thing ten times. Last year I used words no one around here had ever heard of such as ‘ladylike’ and ‘apologetically’. Now these buckin rules have changed and yer man Wasnickski was in his element. I think he was making half them names up. He scored 122 points for Aleksandrów Kujawski. He says it is near Warsaw. Like for Jaysus’ sake. The longest we have is Loughmacrory or Castlecaufield. He then scored over 200 points for his cousin’s name, Benedyck Banaszynski. The most I managed was 43 for Iggy Jones. I’d have doubts that this Benedyck lad exists atall.”

Wasnickski goes on now to the county final as hot favourite where he’ll met the champions from other areas including three-time champion Hettie Horridge (82) who emerged from the Moortown heat yet again, winning her final with the word ‘budley’. Although not existing in the Oxford English Dictionary, local words are allowed as long as they’re placed in context by the user. Her explanation of  “My husband has some budley on him” was found to be an acceptable usage.