← ‘Darragh The Tank Engine’ Writer Accused Of Plagiarism By Publishers
Jeremy Clarkson In Trouble Again, This Time Over Use Of ‘Brolly’ Word → 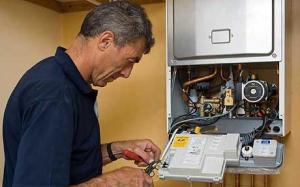 A deadly man in action

A recent survey carried out on local streets and ramparts have concluded that, contrary to popular opinion, unqualified middle-aged boiler servicers make women go weak at the knees, especially those over the age of 50.

Boiler men have relegated stove fitters, farmers and part-time electricians to also-rans after 360 local women from Clady to Brocagh were quizzed whilst out shopping or just walking about, regarding their romantic preferences .

Francie Hagan, a 63-year old boiler man from Aghyaran, is not surprised at the results. Whilst fixing a boiler in Castlederg for a 67-year old widow, Hagan told us:

“Not one bit shocked. I’ve been finding myself flat-out since I turned 50, especially with older women wanting their pipes looked at when there’s nothing wrong with them at all. It’s a bit embarrassing sometimes as I’m friendly with a few of the husbands. I’m no looker myself but I think the smell of home heating oil and the dirty boiler suit seems to drive the women mad. I’m not complaining. £100 for a call out every time.”

“There’s an oul man around these parts and he’s exhausted running about fixing boilers that don’t seem to need fixing. I sort of feel sorry for him but he charges £50 for even looking at the boiler from a distance. Then if you add on another £50 for a frock we’d buy for him coming and it’s a bucking fortune we’re out. He smells deadly though.”

Since the publication of the survey, angry housewives have been accompanying their boiler-servicing husbands on jobs, posing as apprentices.

Meanwhile, many local discos have registered a rise in young boys looking like old boiler men on nights out hoping to win the hearts of their female peers. Dancing with spanners and pliers in hand has become the 2014 craze in Cookstown and Omagh nightclubs.

← ‘Darragh The Tank Engine’ Writer Accused Of Plagiarism By Publishers
Jeremy Clarkson In Trouble Again, This Time Over Use Of ‘Brolly’ Word →