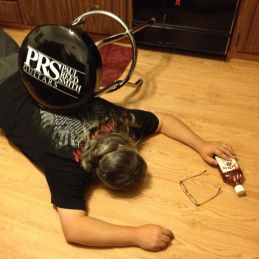 Tessie’s. An hour ago.

A landmark case which saw a Clonoe man sue his local pub for £3000 for falling off his stool is set to open the floodgates for hundreds of similar type claims.

Gay Taggart, who claims he fell off his stool 300 times in Tessie’s Pub over the course of one year, received £10 per fall despite the probability of being highly intoxicated every time. CCTV footage confirmed all falls took place after at least 8 pints of Carlsberg. Unfortunately, Tessie’s defence team were unable to prove Taggart was drunk on each occasion.

Taggart, 44, has encouraged everyone who has fallen off a stool across the county to get on to their local solicitor and press for charges:

“At £30 a go it’s worth it. That’ll buy about another eight pints and hopefully you’ll fall off and the whole process starts all over again. I’ve already fallen off twice this week, and one of the stools even had a back on it. Them stools are deadly.”

Seamy Tessie, whose family have run the establishment since 1766, is amazed the case saw the light of day, never mind be successful:

“This is madness. Taggart was stocious every time. He’d be singing ‘She’ll Be Coming ‘Round The Mountain’ one minute and the next he’d be flat on the slabs, snoring away. And now I have to give him his £30 back. I’ll be ruined if everyone backdates their claims. Sean McCann fell off 7 times one day when Clonoe won the Championship. There’s nothing wrong with our stools.”

Tessie has been working closely with local entrepreneurs to invent a new device which sees punters locked into their seat for their duration of their drinking sessions.

Leaked footage of one fall: