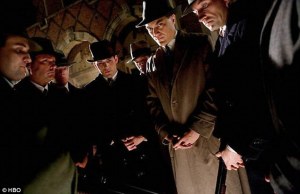 Tempers were simmering tonight across Tyrone after six sunglassed men and women in long coats invaded a field in Aghaloo and pulled the whistle from the referee’s mouth, effectively abandoning the home side’s game against Brocagh.

‘under no circumstances should this new county squad player be allowed to compete for ball against your average pleb club footballer. We’re only doing what we’re told.’

“I’ve had enough. It’s bad enough calling us plebs and stuff but we were winning 4-12 to 0-0 as half the Brocagh side were still cut from last night’s ACDC concert.”

The abandonment comes hot on the heels of a rash of match postponements issued by the CCCCC in club games involving county players against the plebs. The CCCCC have attempted to soften the blow by offering free mineral and crisps to all affected pleb club men with a warning to ‘know your place’.

Meanwhile a major investigation in Derrytresk lasted 6 hours today after club officials attempted to discover who their secret county player was after their game was one of those called off by the CCCCC. Several players were water-boarded and dragged up and down their pitch from a rope tied to a Massey Ferguson in order to discover who’d squeal. It wasn’t until an U14 player meekly suggested maybe it was because they were playing Edendork who have a couple of county men that the interrogation was finally called off.