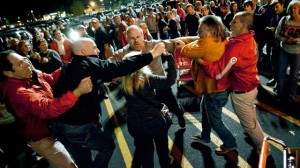 Witnesses have described the Black Friday carnage at a well known Coalisland fast food establishment as ‘sheer madness’ and ‘total bedlam’ after a deal on the sausage supper and a can of Lilt set pulses in the town racing.

Before doors opened at 9am, an estimated 44 people were already shouldering each other in order to gain prime position for the charge to the counter. Although several calls were made to the PSNI to monitor the crowd before the opening by concerned town residents, authorities failed to appear with one police source reportedly saying ‘Coalisland? Are you serious?’

One regular punter, who was interviewed with a damaged sausage balancing delicately on his shoulder, revealed:

“Landi’s should have known better. I was in simply to get a bag of fish goujons for breakfast but ended up on the floor wrestling with a cousin over a portion of beans I didn’t even want. When the hurling sticks were produced I decided to give up the ghost but was still hit on the head with a severely battered sausage.”

Estimates suggest over 260 hungry customers were crammed into the premises at 9:30. Shortly after, a mini-riot commenced after owners admitted there was no Lilt left, with many refusing the offer of a free 7-Up.

“When the message was relayed about the Lilt, people lost it. The till was smashed and people were chanting things like ‘you can shove your Fanta up yer hole’ and stuff like that. This meal deal was an ill-advised decision.”

Early reports also suggest there were skirmishes just off the Tamnamore roundabout after a roadside strawberry vendor refused to reduce any of his prices for Black Friday.