McElduff To Build A Wall Around Pomeroy And Make Them Pay For It, If Elected 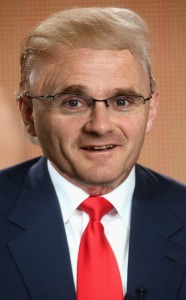 Barry McElduff, who has been labelled ‘The Irish Trump’ due to his uncanny ability to maintain an impressive mop of hair, has strengthened his likeness to the American Republican candidate after an insider confirmed he will offer to have a wall built around Pomeroy and make the Pomeranians fork out for the manpower, bricks and mortar, if elected.

McElduff has reportedly hidden a deep resentment of the village since 1980 when he, as a goalkeeper, conceded 16 goals in an under-14 game against Pomeroy, with seven goals scored by his cousin Deirdre. His election manifesto is to include taxing Pomeroy citizens £300 a year each to build the wall which will be managed by McAleer and Rushe.

“Him and Trump are some bedfellows. Both mad republicans, the gift of the gab and admittedly eye-candy for the housewives. But the wall idea is one similarity too far. There’s talk that we’ll only be able to leave for hospital emergencies and a one-week summer holiday as long as we remain at least 5 miles from Carrickmore at all times. I just wish Deirdre McElduff had taken it easy that day but we were short of numbers and she’s a fierce competitor.”

Remarkably, some Pomeranians have welcomed McElduff’s plans and revealed they intend to vote for their arch-nemesis. Builder Felix McGeary (39) revealed:

“This wall will take about 18 months to build. That’s a year and a half of solid work if McAleer and Rushe take us on and then add on another six months of normal delays and stuff. I know we’re being taxed in Pomeroy to pay the workers to build this but if we work on it ourselves then we get our money back, so in your face McElduff.”

McElduff will also reportedly promise ‘to take care of women’ in his manifesto although no one was able to explain what he meant by this.