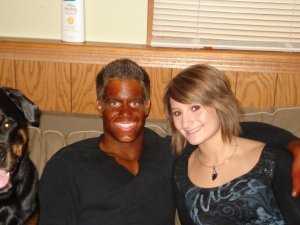 A Brocagh mechanic, who has recently holidayed for a fortnight in Portugal and acquired an impressive tan, has vowed to not wash until he returns to work in case his new complexion is worn away by soap and water.

Noel McGrory (44) maintains he spent over £3000 on this tan and will not sabotage his chances of impressive female clients looking a servicing or tyres mended. His family, consisting of seven sisters and four brothers, as well as a wife and eight children, are pleading with the Ballybeg Rd man to even apply some baby-wipes to ease the unpleasant odour.

“I didn’t sit in that Algarve sun for days with only a factor 15 on me for it to be washed away with a bit of Lifebuoy and water. I’m back to work this day next week and I’m not banjaxing the whole reason for spending that money on a holiday.”

The 21-stone former Brocagh Emmets full back has already been barred from several drinking establishments in a 10-mile radius due to his effect on other customers. Battery Bar regular John ‘Trunks’ Quinn admitted it was putting a strain on friendships:

“I completely understand McGrory’s predicament but he should have arranged to go back to work much earlier in the week. The smell is putrid and he wouldn’t be known for his general cleanliness anyway. But I can empathise. I went to Bundoran in 1988 and came back as brown as I’d ever been and the women were going mad any time I was in sight that first day. A quick bath the next morning and the whole shebang was gone.”

McGrory’s wife attempted to remind her husband that she likes him the way he normally is yet Noel equally informed her that a plain white Noel McGrory doesn’t pay the bills when it comes to women looking their spark plugs looked at.