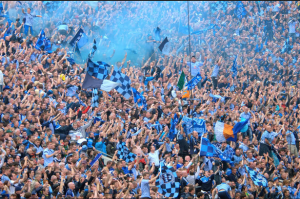 Killyclogher are calling foul play after it emerged last night that over 1000 Dubs are making their way north by foot to Omagh on a daily basis to bolster the Coalisland support for the Tyrone Senior Final replay this Sunday.

In addition, it was revealed that the Fianna committee have paid for a dozen Dublin fans to arrive on the express train tomorrow morning to offer singing lessons to the Coalisland faithful including well known ditties such as ‘Come On You Boys In Blue’ and ‘Molly Malone’.

“It’s not against the rules but it’s against the spirit of the game. They’re trying to make their crowd look bigger and sound louder. It’s a disgrace but it’ll come back to bite them. There’ll be a thousands Dubs staggering around Coalisland on Sunday night and these boys wouldn’t be known for their affection for the law. I suppose they’ll blend in rightly then.”

The Dublin/Tyrone Supporters’ Club chairperson Ronald McSherry maintains that the Dublin fans are still match-fit after their recent extended run in the All-Ireland Series and will bring an unprecedented level of pure hallionism to Sunday’s affair.

Killyclogher’s plea for Omagh fans to attend in support was laughed out of it.