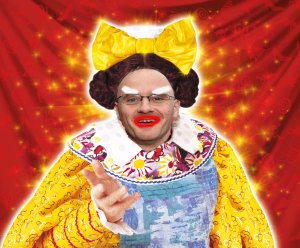 Close friends of West Tyrone MLA Barry McElduff confirmed that the Carrickmore man was putting a brave face on it tonight after he arrived at Stormont dressed as a panto dame due to a misunderstanding by text.

McElduff, whose book Keep ‘Er Lit was narrowly overlooked for the Booker Prize last year, reportedly received a message to his phone from a Sinn Fein MLA stating that it was ‘well and truly panto season in Stormont today’, in reality referring to the Arlene Foster/HRI scheme debacle played out in Belfast this morning.

Omagh fancy dress shop owner Leo Kelly revealed how an excited McElduff arrived on his doorstep at 10am:

“We all had a fair idea that Barry likes dressing up and is game for anything. But I underestimated his desire to become an established panto dame. He tried on about a dozen different dresses and already had the make-up on him before he arrived. He was jumping about like a child on Christmas morning, bless him.”

Stormont officials admitted they feared the worst when they saw a small man in a dress, wearing heavy lipstick come tearing up Stormont lane shouting things like ‘oh no he’s not’ and ‘she’s behind you’.

“Ah you had to see his wee face. He was hyped up and it took a good ten minutes before he accepted that it was just a big misunderstanding. After the penny dropped we let him try a joke anyway. I said to him ‘I hear eggs are going up’ and he gleefully replied ‘that’ll surprise a few chickens’. He laughed for a few seconds, we all did, before the reality of the situation hit us again.”

As McElduff’s taxi pulled out, Gerry Adams was seen shaking his head from an upstairs window.