Dennis Taylor Spotted In Coalisland. Will He Start Against Killyclogher? 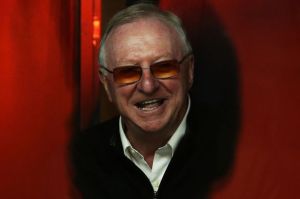 News that Dennis Taylor was seen heading out of Landi’s this morning with a pastie supper and three tins of Lilt have sparked rumours that the snooker genius may have been a late call up to the Fianna squad for Sunday’s county final against Killyclogher.

The 69-year-old former World Champion played for the Tyrone county minors in the 1960s despite not being able to see the goalposts, the ball nor his feet, and has supposedly been spotted soloing up and down Annagher Hill under the blanket of midnight several times since Sunday.

However, Taylor’s inclusion at recent training sessions has not gone down well with some squad men who have been training all year.

“There’s bad blood alright. Taylor is near 70 afterall and can hardly run. He was brutally shouldered into the wire three time last night. But it looks like he may start top of the left on Sunday and management hope his jovial friendly banter and knowledge of acute angles will see the Fianna over the line.”

Despite pleas by the Coalisland dietician to tone down his diet, Taylor allegedly finished off his Landi’s special by heading into McGlinchey’s for a cowboy supper and a cheesy chip.

Talk that Killyclogher have asked Steve Davis to mind the edge of the square has been rubbished as ‘just stupid talk’ by a friend of Mark Bradley.