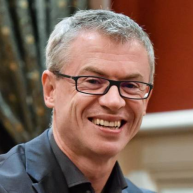 Thousands of women across the country will now watch Strictly Come Dancing instead of the All Ireland Final replay between Dublin and Kerry after the housewife’s favourite Joe Brolly was replaced on the RTE panel for the game.

Brolly, who was recently voted in an online poll as the man most women aged 40-65 would like to hoke about with after a dance, was told his services were not needed this week on RTE after he refused to allow Pat Spillane to touch his knee live on the TV last week.

A gaggle of women in Tattyreagh gathered at RTE studios this week to complain about the decision, with one telling us:

This is awful. Not since Johnny Logan in the early 80s have we lusted over a man on the RTE like we do Joe with his wee curly head and twitchy nose. I’m 67 but I’d still let Brolly put me through my paces. And I wouldn’t care his he slaughtered my performance after. I’d even wish for it. Swoon.”

RTE are set to lose thousands of viewing figures as disaffected housewives turn to Sky TV to see if they can get a glimpse of Jimmy McGuinness or even Canavan if he wears the tight fitted jeans again.