Archaic GAA Rule Means Armagh Can Now Claim A Part Of Tyrone For A Whole Year, After Their 3 Wins

A long-forgotten rule in the GAA rulebook was unearthed by a fanatic in Bessbrook this morning, indicating that if one county defeats a neighbouring county three times within a year, then the losing county must nominate a 5-mile radius to be handed over to the victorious county for 12 months, before the end of that calendar year.

Dualta Moriarty, who stumbled across the rule when unsuccessfully looking for a different rule regarding calling an umpire a ‘glipe’, also explained how the losing county must nominate the piece of land to be handed over, without consulting the affected community.

Rule 34.2.3 of the official GAA rulebook has been forwarded to the Tyrone county board who have a preliminary shortlist already drawn up which includes Eglish, Moygashel, Windmill, Urney and Fivemiletown.

Trillick was initially included in the shortlist but was withdrawn after an objection from Fermanagh who already lay claim to most of the area.

“See if those hoors in Garvaghey sell us down the river, they’ll never have a McGleenan or McKenna play for the county again”

Moygashel residents have welcomed their nomination, stating that they love the Armagh jersey.

In what could be the start of a series of sanctions either side of the Blackwater, Armagh farmers, in an effort to unsettle their bush-dwelling neighbours, have ceased selling apples to Tyrone vendors and the general Red-Hand public as of today, 26th May – a full 10 days before both counties meet in a winner-takes-all back door game in the Athletic grounds.

Homes throughout Tyrone will have to forgo apple pies, apple crumbles and just apple-eating in general for the foreseeable future due to the draconic sanctions which have been allegedly attributed to McGeeney and his backroom team.

Thousands of Tyrone school children left home this morning in floods of tears, having to do with pears and mangos instead of their traditional apple and a lump of cheese.

Pat McHurl from Ardboe, who has been eating apples since he was about 3, fumed:

“If this is how they want to play it, bring it on. Tyrone airspace and waters are a no-go area from now on for Armagh ones with their drones, pigeons and boats. I saw a boy from Maghery veer towards the Washingbay in his boat this morning and he received two air rifle pellets as a warning inches above his head. Pigeons with Armagh heads on them are legitimate targets.”

Local politicans have appealed for calm as there are still 10 days left.

Tyrone/Armagh McKenna Cup Game To Be Played In Ulster-Scots

To celebrate the International Year of Languages, the Ulster Council has instructed both Armagh and Tyrone county boards that players on both sides must speak in Ulster-Scots throughout the game next week or they’ll be thrown out of next year’s competition and replaced with Rathlin and Coney Island.

Already, Armagh manager Kieran McGeeney has set up three workshops this weekend for his charges, in which phrases such as ‘thon’s a wile footerin yer doing wi thon ball ye hallion’ and ‘thon day wid founder ye’ will be taught to the Orchard men.

Although the Tyrone squad are currently holidaying in America, Fergal Logan made all his players converse in Ulster-Scots whilst riding on a helter-skelter during a funfair visit in Orlando. According to sources, Ronan McNamee was overheard saying to a barman afterwards, ‘I’ve a quare drooth on me, forbye foundered in these half-troosers‘.

McGeeney and Logan have asked the Ulster-Scots Association for translations of certain phrases particular to their county such as ‘red diesel’, ‘diffing’ ‘and ‘off-licence’. A rep from the society will attend training sessions next week to help.

Contraption used to spy on Tyrone

Already under pressure from TV, radio and print journalists across the country for the standard of football, the GAA received another blow to its image after a raid on Armagh Planetarium found high-tech telescopes and satellite devices pointed directly at various locations in Tyrone including their GAA headquarters in Garvaghey and Sean Cavanagh’s back garden.

Suspicions were raised on Tuesday night after players noticed a ‘hovering star with flashing red lights on it’ during county training which was later confirmed by NASA as an Armagh-made satellite named ArmNav. The 13-acre floating structure was sending images back to the planetarium where Kieran McGeeney and other members of the Armagh management team dissected the information in preparation for a potential clash between the counties later in the Summer.

During the dawn raid, the PSNI astronomical investigation team also found some of the most powerful telescopes on the planet trained on a garden in the The Moy, suspected to be that owned by Tyrone captain Sean Cavanagh. DVDs seized showed hundreds of hours of footage of Cavanagh in his garden doing shimmies and pulling down trees as well as a few mid-winter barbecue sessions.

A Tyrone County Board official told us:

“Right, it has gone too far. This paranoia within the game is destroying us. Defensive tactics look like child’s play compared to the efforts of McGeeney’s back room team. Apparently one of the telescopes was able to see right into Mickey Harte’s kitchen, where he often draw tactics on conflate boxes and stuff.”

The finger of suspicion has fallen on a female Armagh-born employee in the planetarium with strong links to the Moy through marriage. An insider, who wished to remain nameless, confirmed the character in question seemed to work late shifts a lot more since the new year and appeared to be wearing fresh Armagh gear every week.

Tyrone and Armagh In Amazing 12th of July Gesture 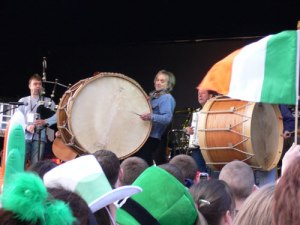 In a proposal some are calling one of the most important peace gestures in Irish history, Tyrone and Armagh GAA boards are considering combining their potential July 12th Round 2 Qualifier clash with the Twelfth celebrations on the field of play.

The scenario will only take place if Monaghan defeat Armagh in their replayed Ulster semi-final this weekend, with bookmakers reckoning this scenario will be the likely outcome.

Both county board met yesterday to thrash out an agreement on the proposal with the following details confirmed as definite:

“We in the GAA pride ourselves with forward thinking and this is just a natural extension of that. There are other proposals we are considering so don’t take that list as a definite. There’s talk of marching back to the changing rooms after the game is over, if the players are fit for it. This will be a special day for everyone.”

A stumbling block has surfaced though as Armagh have demanded they walk their tradition route on the outside, closest to the crowd. However, Tyrone are refusing to also give up their right to the outside lane and there are concerns there’ll be a stand-off. PSNI officials have reminded both county boards that they’ll employ water cannons if an impasse is reached on this issue.