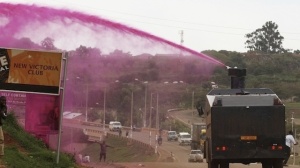 The Glenelly Rockin By The River Festival organisers have reminded punters that they won’t be trigger-shy if things cut up rough during the Nathan Carter concert and have especially warned women who may let excitement get the better of them. Having watched with interest the goings-on in Belfast at the weekend, Glenelly officials were quick to ask for a loan of one of the water cannons but added a sinister warning:

“Let us assure you, we’ll be testing this yoke to its capacity. And it’ll not just be water coming out of it if people don’t behave.”

Organisers have drawn up a list of potential troublemakers, topped by women from Plumbridge who have a reputation for going ‘buck mad’ when they hear country music.

“Yes, it is true that Plumbridge women are high on our radar, especially after they wrecked the hall during Hugo’s charity concert last summer. Any sign of wrecking during Carter’s concert and they’ll be getting the hose on them. Even if we think we don’t like the look of someone they’ll be sent 60ft into the air without warning. We’ll show these PSNI ones how it’s done.”

The use of dye in the water has not been ruled out as well as throwing in a distinctive odour.

“The Chinese wouldn’t be behind the door when it comes to using dye. We’ll be spraying pink at drunken lads. Also, a fertiliser will be added if Carter is inundated with women’s knickers. Tam Jones emailed us to say he wished he’d done a concert in Glenelly if that had been the policy back in his day.”

Organisers have added that there’s almost a 99% chance of the water cannon being deployed during the More Power To Your Elbow concert on Saturday, simply to give the locals a “much-needed wash” for Mass the next day. Shower gel will be added.