Louth GAA were quick to throw cold water on the rumours that Leinster rivals Dublin were caught training by the fresh photography skills of new manager Mickey Harte.

Harte, who took up the reins of managing the Wee County at the end of last year, managed to fill free time in recent months by taking up photography and was spotted around pitches frequented by Dublin squads in the past, albeit trying to snap pictures of curlews and other birds that reminded him of home.

However, rumours that he took photos of Fenton and Cooper training are way off the mark according to Louth committee member Gerard Sludden:

“I know for a fact that Mickey did not take them photos. He uses one of them instant camera things and wouldn’t have the zoom capacity clearly used in the leaked photos. Listen, if we beat Dublin this year because their players have been jailed over this it’s their fault. And Louth are rising anyway.”

Harte will begin his tenure in charge of Louth in Division 4 which also sees one of his 00s players Enda McGinley in opposition in charge of Antrim. Rumours that Harte was seen near Casement Park taking photos of murals has been brought to McGinley’s attention.

After denials from Sky TV and Mickey Harte from having any influence over the narrowing of Healy Park for the clash between Dublin and Tyrone on Saturday night, the spotlight has now been shone on ‘wee fairies from the Plumbridge direction’ as well as the referee David Coldrick.

Omagh groundsman Patrick Hanlan revealed he received a visitor to his door on Friday night around midnight but couldn’t make it out because of the darkness as well as the visitor wearing a cloak:

“All the person said was ‘Ye may narrow that pitch’. I thought it was a sort of a threat but hadn’t a clue who it was. It could have been Harte, a Sky rep or even the referee Coldrick but the more I think about it, they had a Plumbridge accent and looked very small under the cloak. It may have been a fairy from the Plum or Cranagh direction.”

Referee David Coldrick has also come under suspicion as it has been explained that a narrower pitch leaves it easier to keep up with the play, though he may have underestimated the distance he’d need to take it in by.

Meanwhile, rumours emanating from Ballybofey suggest that Donegal officials have set about narrowing the Tyrone changing rooms, making it awkward for players to get changed with dignity. 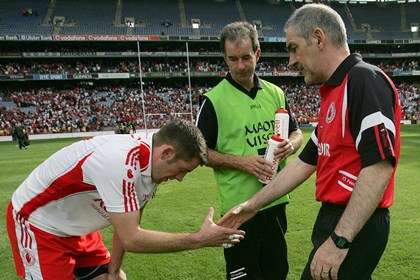 Following a spate statements and counter arguments regarding Tyrone’s style of play over the last few weeks, the county board have announced a 4-way MMA bout between giants of Tyrone GAA to be held at Garvaghey in aid of a new donkey sanctuary in Aughnacloy.

The fight, which pits two Moy men (Sean Cavanagh and Philip Jordan) up against Ballygawley’s Harte and Ardboe’s Devlin, will be televised live on Sky Sports 3 on the 31st June at 7pm.

Despite differences of opinion on the same issue between the two Moy men, it appears that they are prepared to put that aside for the sake of club loyalty and team up to face the wily experience of their former manager and the pure dirt of his Ardboe assistant.

Speaking at the media launch of the event, Tyrone PR expert Harry Quinn admitted there will be no softening of current mixed martial arts rules:

“Gavin Devlin was adamant that anything goes as soon as the referee gives the nod. Although Sean has the obvious height advantage over both men, Devlin is skilled in the deeper dark arts, something only loughshore men are proficient in. Harte may not have age on his side but he know’s both Moy mens’ Achilles heels inside out. Ruffling Sean’s impressive mane is a predicted tactic.”

Philip Jordan was this morning seen lifting empty kegs of beer outside Tomney’s and firing them at a wall shouting ‘you should have made me captain earlier ye bollocks’, suggesting he has already started intense training. 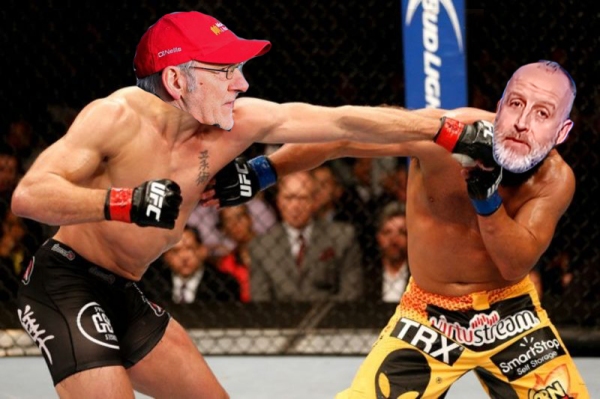 Tyrone Team On Brink Of Implosion Over Sock/Stocking Rift 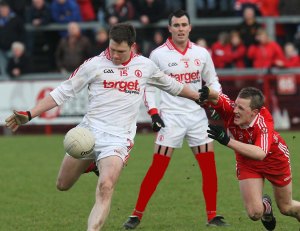 An artist’s impression of the new attire

Neutral mediators were this morning attempting to repair the damage caused by an internal rift over the sock/stockings issue which has blighted the Tyrone senior county squad since the start of the year. Tempers were said to have exceeded boiling point last night when nine players turned up to training allegedly wearing the new sock/stockings imported from a warehouse in Bangladesh. Calling themselves ‘The Nylon Nine’, spokesperson Cathal McCarron is adamant they will not back down on this:

“Yousins don’t know what it’s like. We’re running about a field in the depths of winter with a t-shirt, shorts and rolled up socks whilst yousins all sit with your coats and hats on, drinking team and all. In Casement last week I couldn’t feel my legs half way through the warm-up. They won’t let us wear tracksuit bottoms or hats but there’s nothing in the rulebook about these new stockings from Bangladesh. I’ve been wearing them  to training at Dromore for a couple of years now and even Ricey eventually bought into them. He calls them suspenders but on the box it says socks/stockings. It’s time Mickey and the backroom lads moved with the times. Tony Donnelly has been wearing long-johns since I joined the panel. It’s one rule for them and none for us. We’ll be wearing them in Armagh this Sunday. Mark my words.”

Harte has set in place contingency plans this weekend to counteract the possibility of the Nylon Nine turning up kitted out in their new attire for the Fermanagh game. A backroom member, who wished to remain anonymous, told us:

“Holy ghost lads, they’re suspenders. SUSPENDERS! Can you imagine the goading they’ll be getting from them Fermanagh lads who spend their entire lives walking about in the rain wearing Frankie Goes To Hollywood or TheA-Team t-shirts without a complaint. We’ll be laughed out of Armagh. There’ll be some noise coming out of our changing room tomorrow if they go ahead with the threat. You’ll hear the slaps. There’s a rake of lads from Urney and Dregish who’ll take their places.”

Fermanagh manager Peter Canavan has refused to comment but an Erne insider claims the former Tyrone captain nearly wet himself thinking about it this morning.

Harte Worried About Mugsy And Crisps

With the recent news surrounding Tyrone GAA’s new sponsors, Mickey Harte has expressed fears that the new partnership may play havoc with his plans to keep tabs on members of the squad who ‘winter too well’ over the non-footballing months. With Kevin Hughes retired, initial hopes were that the Hunky Dory freebies would remain largely untouched, enabling Harte and the squad to deliver the crisps to the less fortunates in Brocagh, Eskra and Dregish. However, all changed with a phone-call the management team received last night from a Healy Park attendant.

“At first I thought it was a wind-up,” an anonymous official told us, “as it was wile cold last night. But I could hear the lads codding about in the background. It didn’t take long to identify the voices: Mugsy, Joe McMahon, Gavin Devlin, big Pascal and Cathal McCarron. The poor Omagh gatekeeper said they were demanding to get training at the field in preparation for next year, even though we’ve given them time off til St Stephen’s Day. The penny soon dropped with me. Them bloody crisps.”

Harte and his team made their way to Omagh only to be confronted by the hungry fivesome, McCarron doing the talking, not a kitbag between them, demanding to hear the full details of the sponsorship deal and when the first batch would be arriving. Negotiations went well into the night with threats of resignations and counter-threats of walking from the panel before McCarron persuaded the others to accept the only deal on the table: 50 packets each for the months of November and December with a renegotiation in January, as long as the other squad players weren’t aware of it, especially Colm Cavanagh and Marty Penrose who also ‘winter well’ at the best of times.

Penrose, in particular, is reported to be devastated that they didn’t pursue his idea of a dream deal with Milky Bars or Snickers.