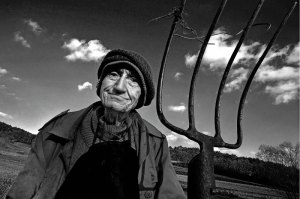 84 year old Terence McVeigh has surprisingly lifted the Tyrone’s Sexiest Farmer 2013 title after impressing judges with his handling of livestock, machinery and general working attire during an observation at his farm on the Moy Road last week. McVeigh, who was previously a finalist in 1963, beat off stiff competition from six other finalists, including the former Miss Levi Jeans of Kildress 1988, Masie McGinn.

Judges delivered their verdict at a packed field in Clogher, after a final parade of contestants around the yard, to a stunned silence. Apart from Kildress’s McGinn, Augher blonde bombshell 23-year old Jenny McKenna was also a bookie’s favourite having just taken up farming last Summer in order to win this competition.

“It’s a great result for us but there’s something fishy about this. McVeigh has a permanent stoop, just the one eye and hasn’t washed his farming since the mid-70s. Jenny McKenna was 6-1 on and just last year won the Augher Rear of the Year. It makes no sense at all, though we’re sucking diesel financially.”

When asked to explain their scoring, a rather evasive Tom Mulholland remarked:

“It was an easy decision. Ask any woman – the way to a Tyrone girl’s heart is how a man dungs out the yard. McVeigh may have taken three hours to do it, but he was meticulous. He was covered head to toe in manure and sweat but sure isn’t that one of the best sights any man, woman or beast wants. McKenna may have the painted nails, designer jeans and high heeled wellies but she was trying to shear a bull when we arrived down. And let’s be honest, Miss Levy Jeans of Kildress 1988 has let herself go a bit.”

McVeigh said he was going to celebrate his success with a ‘slap of buttermilk and potatoes’. He also stressed that supplying ‘a baste of a turkey’ to the Mulholland household every Christmas was coincidental.

He wins a year’s supply of wellington boots.