← Ardboe’s Famous Bull Might Be Gay. Worse Than Recession.
What’s On In Tyrone This Weekend? → 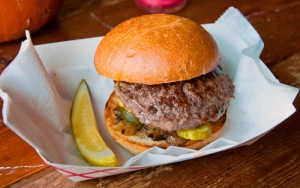 Following the recent horse-meat debacle crippling Ireland’s taste buds, it has been revealed that local East Tyrone supermarkets and corner shops have withdrawn Brocagh badger-burgers from the shelves following rumours that there was possibly a taste of skunk off their produce in a few houses around Mountjoy. Despite being a staple diet in the Brocagh area since first accidentally consumed at the Washingbay Sports in 1955, the loughshore locals have intimated that they’re prepared to eat other exotic foods like spaghetti bolognese or cottage pie until they can be sure they’re eating 100% badger. One of the Mountjoy victims, Jessie Dorman, is of no doubt that the badger-burger he bought was a bit off:

“For fifty years I’ve had at least one badger-burger a day with a slap of spuds and banes. I know my badgers. It was my father who was the first man to taste the delicious badger meat after winning the wellie-throwing competition at the Washingbay Sports fifty-seven years ago. His last throw was so high it landed on a wild badger in the adjacent field, knocking its lights out. Afraid of the reaction to the murder, he ate the badger on the spot to hide the evidence only to discover its succulent quality. Within a couple of years his badger restaurant down by the Castlebay Centre was the envy of London and Paris. Stewed, grilled, baked, boiled or fried – people couldn’t get enough of it. This recent contamination is disastrous news. I’m not sure what a skunk tastes like but it definitely tasted a bit skunky.”

Despite there never having been a sighting of a wild skunk in Ireland, Dorman says there’s a good chance it escaped from Belfast Zoo and went up the M1, turning off at Tamnamore – perhaps explaining the bad smell up around Falls’ Bar. Local politician Susan McAvoy has urged locals not to panic or get tore into the drink but to try other foods like chicken or pork for a while until they have extinguished the last skunk from Brocagh or even find one.

← Ardboe’s Famous Bull Might Be Gay. Worse Than Recession.
What’s On In Tyrone This Weekend? →