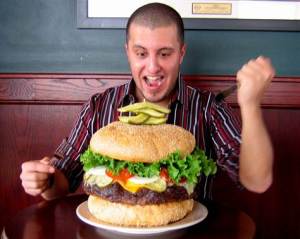 McDonald’s in Tattyreagh today confirmed the introduction of a new range of super-super-sized portions of some of their most popular lines specifically designed for the residents of Tyrone, after a survey showed that what people really wanted were bigger portions of cholesterol.

Saturday saw the introduction of a ‘Skip of Chips’, and a ‘Lorryload of Onion Rings’, both of which were warmly welcomed by residents.

“Mighty”, said 32-stone man Sidney Clarke, who had travelled from Cabragh to be one of the first to order the new ‘Trough of Baked Beans’. “If you ask thon boys to Sumo-Size your order they’ll do it”, said Clarke through a mouthful of Quadruple Cheeseburger and Diet Coke. “You can almost feel your arteries hardening with every bite. You simply can’t go wrong”.

Other diners at the popular fast food restaurant enjoyed a ‘Bathful of Pop Tarts’ whilst children were invited to try the new ‘Gallon of Milkshake’, a mouth-watering bucket of strawberry-flavoured cola milkshake.

“I’m lovin’ it!” joked mother-of-three Nuala Morgan from Eskra, “And so are the kids. We brought them here last night and we didn’t hear a word from them for the whole meal. In fact, they were quiet for the entire night. And most of today come to think of it. Still, it only cost £2.20 to feed the four of us, so I’m not complaining”.

Later this month Tattyreagh regulars can look forward to ordering a ‘Ditch of Coleslaw’. All of the items in the new range cost 39p.