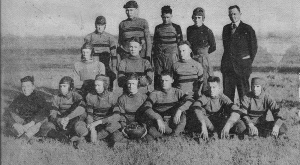 Despite founded allegations of an anti-Tyrone vibe emanating from the GAA hierarchy this year, the Red Hands have been hit with a further sanction with the news that the county side must step down and be replaced with an entire Aughabrack side.

Bans for Penrose and Gormley coupled with a media witch-hunt in recent weeks have seen tempers simmering but today’s news has left the county reeling. Local Aughabrack wrestler, Barney McGill, reckons it poses a few problems:

“This is some handlin. Sure we haven’t played together as a club since 1996. Rounding up 15 lads on the morning of the 25th will be some operation. The wemen have a big role here. They need to keep their men in the house on Saturday night before the game. Mayo boys like Aidan O’Shea wouldn’t be out slapping stout into him 15 hours before the game.”

McGill reckons the average age of the side will hit 49 with the entire full back line aged 71, 66 and 59 respectively.

“Ach it’ll be great getting out from the Sperrins as ten of us haven’t been as far as Dunnamanagh. We’ll be able to take home spices and stuff from Dublin. I hear this Mayo side are good but we hold no fear. Don’t forget the slaughtering we gave Owen Roes in 1988. I’m just wondering – who has the jerseys?”

The GAA have refused to reveal why this latest sanction has occurred but warned Tyrone that ‘there’ll be more of where that came from if we hear any more yappin’.

On the plus side, Brian Dooher will be making a comeback even though his years of service has left him bent double and using a stair lift for any upwards movement.