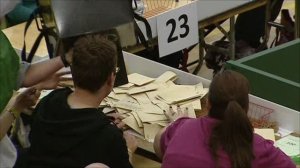 I’m not adding that

Counting in the Mid-Ulster elections was halted after no one in the arena was good enough to ‘do big sums’.

Rumours of a problem with the adding began to emerge after a batch of 300 solar powered calculators were delivered to Magherafelt’s Meadowbank arena at around midday, with some counters complaining that getting over two digits was ‘deadly confusing’ with numbers between 249 and 899 particularly mind-boggling.

“Yes, it’s a symptom of the digital age. People are used to their electronic equipment doing all the hard work. I saw a man complaining after his batch of votes saw someone reach 11 as he was using his fingers to count. The solar powered calculators helped for a while but sure when the dark clouds came they weren’t worth a frig because we only use 40 watt bulbs in here.”

Disaster was finally averted when an 83-year old ex-maths teacher was found in Moortown who still does long division and works out his multiplication with a pencil. Henry Coyle, who has never seen a calculator in his life never mind used one, is currently adding up the Clogher Valley tally much to the cheers and claps of everyone in the building:

“It’s like a football match here. Oul Henry just added up Sinn Fein man Sean McGuigan’s votes there and everyone cheered, even the DUP. People just want out of here. Henry is starting to flag a bit and keeps going to the toilet or dozing off. We have 25 HB pencils so utensils will not be an issue.”

Meanwhile, Independent Kildress councillor Lilly Friel failed to meet the quota. Her vision of ‘a new Kildress, free of illegal fuel and home-made poitin’ failed to pull in votes, polling just 1 follower who may or may not have been herself. Kildress man Kevin Friel, who voted for someone else and also happens to be Lilly’s husband, added “We’re just not ready for that stuff”.