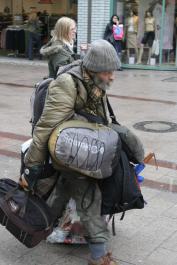 Regular mass-goer, and founder of the Christian Ethos In Coalisland group, Maire Lyons was crystal clear with her take on the issue of trust:

“As long as there’s breath in my body, I’d never allow a Brackavillonian to go to the shops for me. Put it like this, if you gave one of them money and a shopping bag and told them to get bread, milk and the papers for you, you’d never see that bag again. Or maybe you would but they’d be wearing it. Themuns are a shower of heathens up there. They’d take the eye out of your head if you stood still long enough. The bible says we’re all God’s children but they must be a different species completely.”

Such views were replicated throughout the county with only 3% of Urney folk trusting Clady locals to do the shopping for them. At the other end of the scale there appeared to be evidence of a love-in between Galbally and Donaghmore with 88% of Galballians trusting their neighbours to go to the Spar for them. Pat McGinn explained:

“Ah I love it when I ask someone from up the road to go to the shop for me for a pound of mince or a packet of sausage rolls. Them Donaghmore ones are wild generous and sometimes you’d look into the bag and they’ve thrown in about £300 worth of food and jewels and stuff. People say Donaghmore is the Kengsinton of Tyrone but I’d not have a bad word said about them. They even throw coppers at us in the pub. Wild kind.”

Meanwhile, an unexpected figure of 76% trustworthiness between Ardboe and Moortown residents was exposed as a fraud after it was revealed both areas have applied for a £30’000 grant to build a ‘Friendship Wall’ between them. Rumours suggest the money will be drank.