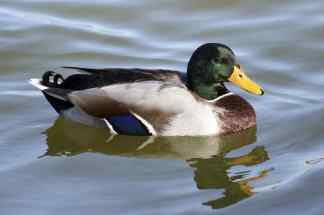 As onlookers burst into a round of spontaneous applause, ten Moortown firefighters finally rescued a duck from the Lough after a 4 hour ordeal this morning.

The duck, thought to be from the Ballyronan area, was reported to authorities at 9am this morning by a woman out walking her four Labradors on the Ardboe Road.

Eleanor Quinn identified a worried look from the duck and quickly made the 999 call before it drifted out any further.

“I knew by the look of it that it was in a spot of bother. It sort of had a frown and the quacks were of a tired nature – like as if it had been out there for hours maybe even days. I know that the Lough can eventually lead to the Atlantic Ocean and people wouldn’t have batted an eyelid to see it float down the Bann. I knew I had to act now.”

The rescue operation, which involved an old disused fishing boat and a £1 net for catching frog spawn, took over four hours to complete such was the duck’s reluctance to trust the boat full of ten uniformed local men.

“Yes the duck was stubborn. We debated shooting it with a tranquilizer dart but with the eyes of the world on us we went the humanitarian way. Fortunately the duck finally saw sense and flew back to Ballyronan.”

There will be a parade through Moortown tonight in honour of the courageous firefighters who admit this was the first bit of action they have experienced since Brian McGuigan got his head stuck in a barrel in 2006.