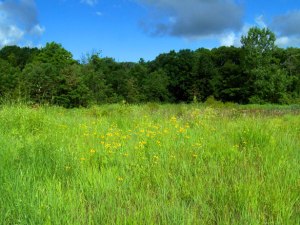 Despite fears for his safety, an Edendork man who had been lost in The Bush since Monday (yesterday) was found today merrily eating a sausage roll inside a filling station on the outskirts of Coalisland.

The good news mirrors another story emanating from Australia last week when a woman also emerged from the bush after being lost for over two weeks, although it is said that Tyrone’s Bush is much more hazardous than the Australian one.

Patsy Farrell, a computer user from Edendork, got lost in The Bush after heading out to get some veda bread and a packet of dishwasher tablets:

“Eff me, I didn’t know if I would make it through the night. I took a wrong turn at the Mullaghteige Road near Mulmuf’s exhaust silencer shop and ended up parked on the side of the road as there’s no signal there and the GPS woman was telling me I was in Dungannon, which I wasn’t. I just kept still til someone found me and survived on Polo Mints and water. It was touch and go.”

Farrell went on to explain what he experienced during the ordeal:

“The noises at night time scared me. You’d hear whistles and yahooing and men shouting ‘come here ye blade ye’ in fields and women laughing and giggling and saying ‘will ye quit, he’ll be home soon’ and other stuff like that. It was like something out of a Spielberg movie. I was just glad to see light and thanked God that he’d given me another day. The milkman stopped and gave me directions back to Edendork which I headed to after a sausage roll in Coalisland.”

Farrell promises to write about his experiences in The Bush and BBC are looking to serialise it with Colin Farrell (no relation) reportedly eager to take up the lead role.