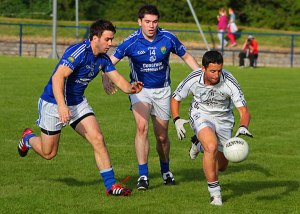 A Coalisland baker is standing by his decision not to bake a cake for a Clonoe couple, who are due to tie the knot in May 2016, citing irreparable sporting differences.

Locally known as James the Baker, the 48 year old business man maintains he’s prepared to go to the European Courts to defend his decision not to bake a cake with the iconic Clonoe black and white colours on the icing as well as a figurine on top of Kevin McCabe scoring a point in the All-Ireland final in 1986.

The devastated Clonoe couple, Paul Corr and Mary Quinn, have contacted a local solicitor to take the case as far as it can go. Corr, who once held the national record for hedge jumping, added:

“He’s some boy. Everyone knows James the Baker is the best baker in the land but he has gone down in my estimation now. I know he’s baked cakes for Stewartstown, Kildress, Omagh and even Dungannon couples…but not for his close neighbours in Clonoe? He can take it as gospel that no Clonoe man nor woman will set foot in his damned shop again. See you in court, James, ye Fianna hoor.”

James Tennyson, whose buns have been known to make people cry with happiness such is their deliciousness, remains defiant:

“My da would turn in his grave if he thought I was donning my cakes with the cursed black and white (spits) of Clonoe. I defend my right to bake my cakes on my terms. Feck the O’Rahilly’s. Yeeooo.”

Local politicians have decided to stay well clear of the issue in the run up to the up-coming elections.