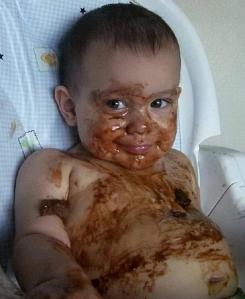 A 41-year old Omagh teacher admitted to opening a Yorkie Easter Egg after his wife caught him stuffing something down the side of the sofa and suspiciously chewing  slowly, with chocolate marks down the side of his face.

The RE teacher, who had given up chocolate at the start of Lent apart from a lapse on St Patrick’s Day when he devoured a 6-pack of Freddos during a parade, revealed he never felt so guilty and has vowed to go the whole of tomorrow without any food passing his lips as penance:

“It was an honest mistake. I thought Lent ended at 3pm on Good Friday, after a three hour deliberation in silence from midday. It wasn’t until I heard the wife shouting ‘where’d that egg go?’ in the kitchen that the horrible truth dawned on me. And I ruined the rest of it by stuffing the remainder down the sofa. It’s just a horrible mess, literally and metaphorically.”

Meanwhile, 40 parents have already contacted Monteith’s school in Omagh complaining that their children also attempted to gorge on Easter eggs after 3pm after they were told by the teacher all week it was OK to do so.

Mary McCabe, a mother of 5, described the scene in her kitchen:

“I popped into the shower around three for the bingo tonight and came down to utter carnage. Every egg was opened and the children were running around hyper with chocolate all over the walls. That bollocks Monteith has some explaining to do, and him an RE teacher.”

The Vatican have reminded people that tomorrow is also part of Lent and that anyone caught indulging in nice stuff will be frowned upon from above.