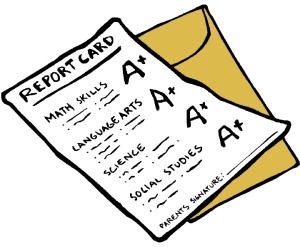 An ill-conceived prank by the Loughmacrory PE department left a mother in tears after her son’s report suggested extreme measures to rectify his non-existent misbehaviour and under-performance.

Johnny Quinn, who achieved 10 A* grades and one E grade in his Year 8 report as well as Student of the Year and 100% attendance, arrived home on the day of his report to find his mother distraught after reading his English subject report.

Unbeknownst to his English teacher Mr McAleer, who was off on long-term leave after cutting off the branch he was sitting on during a spot of home gardening, a contingent of PE teachers conspired to fill in Tommy’s English Language report.

Grading him an ‘E’, despite having already published a poetry anthology at the age of 10, his subject report simply read:

“This bastard should be shot.”

Principal Kinnear admitted CCTV cameras, recently fitted after two History teachers were spotted canoodling in the Science corridor, would be examined to catch the culprit.

“Mrs Quinn is now pacified but the poor woman was traumatised after three hours of wondering where it all went wrong for Tommy in his favourite subject. Only for Tommy spotting a mistake in Mr McAleer’s signature we would have never have known it was a PE teacher.”

Tommy has since been awarded his 11th A* at Loughmacrory College of Excellence.