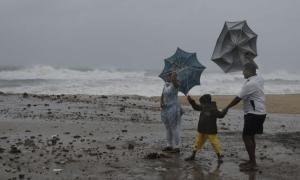 Despite record-breaking torrential downpours and fork lightning, the McClure family from the White City in Dungannon maintained they are having ‘a deadly time’ searching for crabs and playing I-Spy in the caravan before the children head back to school next week.

With the disastrous weather during Summer 2015 making it a miserable break for families, hundreds of Tyronians have descended on Downings and Bundoran in a last ditch attempt to give their children something to write about when they get back to English class in school.

Harold McClure (45) revealed he built his best castle ever on Bundoran beach  last night with a real-life 30-feet wide moat all around his 5-towered castle which took him 3 hours whilst the children watched in a huddle or kept an eye out for crabs:

“It’s just a pity there was no one else to see it bar the children. The ditch was lethal. It was 7-feet deep full of rainwater, and a real death trap so I got the children to buy and carry a new door from B&Q to act as a bridge. The rain isn’t too bad when you get used to it. Spotting crabs is great fun too. I think we pointed to over 100 crabs though some of them might have been the same ones.”

A caravan site barbecue went ahead anyway despite over 47 inches of rain falling during the feast, with three children hospitalised with acute hypothermia.

Event organiser JJ Doherty admitted the hospitalisation was ‘unfortunate’ but families should ‘feck away off to Malaga or something if they don’t want to run the risk of death whilst chewing on a hotdog during an Irish summer’s day.’