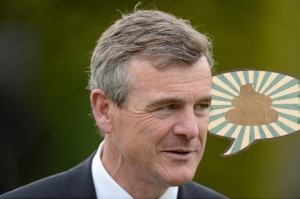 Colm O’Rourke, the ex-Meath hatchet man and RTE pundit, has admitted to feeling ‘mightily relieved’ and ‘a little bit embarrassed’ after finally getting to the root of the ‘bad smell’ which he originally thought was following the Tyrone football team around the place.

O’Rourke, who visited his GP in the aftermath of the Tyrone/Monaghan quarter final after a particularly bad stench, was told by his doctor that the smell was in fact emanating from his own mouth, known in the medical world as Orificium Manuritis, or ‘talking dung’ in layman’s terms.

A friend of the Navan headmaster told us:

“Colm is a happy man tonight. He couldn’t understand why the foul smell would worsen every time he analysed Tyrone games. Don’t get me wrong, the smell was always there no matter what he was harping on about but any time he mentioned the ‘T’ word it went into overdrive. He thought it was coming from the Tyrone squad but we now know he was just spouting shite from his own orifice. It’s a great relief for everyone. Orificium Manuritis is apparently contagious, especially amongst journalists, so it’s important to manage the outbreak.”

RTE have promised to help O’Rourke during his rehabilitation process and will bar him from analysing Tyrone games for 24 months.

Meanwhile, a source from within the Tyrone camp has revealed that Mickey Harte has called an emergency squad meeting this week after watching last week’s ill-tempered semi final between Mayo and Dublin. It is thought that Harte believes Tyrone are ‘still too nice’ to compete with the big three and has called in trainers from the other semi finalists to share their acute expertise in diving, feigning, sledging and off the ball skulduggery which was brilliantly executed on Sunday, at the highest level.