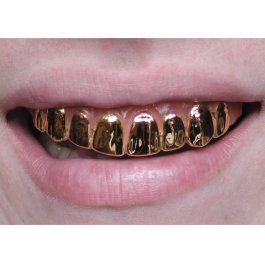 In a desperate bid to placate the anti-mining supporters in the Greencastle area, an offer of gold teeth for every resident has been proposed by a joint Stormont/Dentistry Association organisation. The offer, however, has been rejected by a majority decision after three nights of deliberation and forceful arguments which also saw a minor brawl on the Crockanboy Road involving bits of wood, turf, three dogs and a pellet gun.

The use of cyanide has been a contentious issue in the gold-mining proposals at the foot of the Sperrins, with many believing that the long-term effects are unproven and potentially unsafe. Local traveller, Kieran Donnelly, travelled to Finland to speak to residents of a village which experienced gold-mining recently:

“There was a definite side-effect. I couldn’t understand what any of them were saying and not one of them was for Clones in May. But their gold teeth was something to behold. I’d be rightly tempted by that – heading to a disco and the Kildress ones being jealous of our teeth. But, I suppose gold teeth are no good to you if you’re riddled with the consumption because of the cyanide.”

The 3-day debate over the offer of gold teeth appears to have revolved around a certain Diarmuid Devlin who seemingly convinced several friends that cyanide might have similar properties to kryptonite and, if fed under strict conditions to the senior football team, might make them giants and win the senior championship.

Devlin backed down when told that Superman wasn’t real and anyway if he was he’d probably get out of Greencastle straight away and head to warmer places like Bundoran or Downings.