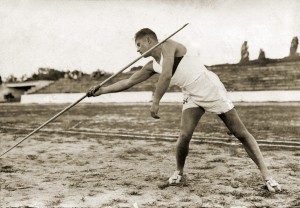 John Hinney, a well known Strabane rioter who comes from a long line of Hinney insurgents, has qualified for Rio after launching his homemade javelin 83.5m from one side of the River Mourne to the other in a fit of bad temper.

Hinney, who lists ‘throwing rubble at the Brits in the 80s’ as a previous pastime, will fly out to Brazil at the end of July after spending two months at a high altitude training camp in the Sperrins. Olympic officials confirmed that the Spout Road man had reached the qualifying distance of 83m although the Irish Athletics Association have refused to recognise the distance as an Irish record due to a ferocious wind factor on the day. The official Irish record still stands as 82.75m.

“I’ve been practising in my field since the London Olympics but couldn’t get over 40m. My mother had been watching me and gave me the best pep talk ever. She said to just pretend there are a pile of Brits in the distance in their Land Rovers giving me the fingers and singing God Save the Queen and stuff like that. All of a sudden I was hitting over 70m regularly so it was only a matter of time.”

The magical 83m distance was achieved yesterday when Hinney’s uncle Tomas Kennedy was spotted on the other side of the River Mourne whistling Rule Britannia in a deliberate ploy to rile the 44-year old Strabane man.

“I lost the head completely and fired my home-made javelin over the river at him. Luckily it was caught on camera and using digital technology it was confirmed as 83.5m. Unfortunately, my uncle is in intensive care and I hope he pulls through before Rio.”

The Irish Athletics Association are looking into scheduling Hinney’s Olympic throw at the same time as the Rowing medals are dished out, in the hope that God Save the Queen is belting out as he makes his first throw.

Posted on April 22, 2016, in Strabane and tagged 2016, olympics, rio, Strabane. Bookmark the permalink. Leave a comment.